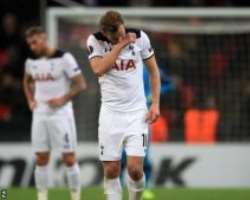 Ten-man Tottenham Hotspur were knocked out of the Europa League as Gent held them to a draw at a sell-out Wembley.

Spurs, who trailed 1-0 after the first leg of the last-32 tie, made a great start as Christian Eriksen slipped an angled shot under Gent keeper Lovre Kalinic.

The visitors equalised through Harry Kane’s own goal, leaving Spurs needing to score twice more in front of a Europa League record attendance of 80,465.

Their task became harder when midfielder Dele Alli was sent off shortly before half-time for a dangerous high tackle.

Victor Wanyama’s curler into the top-left corner revived Spurs’ hopes, only for substitute Jeremy Perbet to prod Gent into the last 16 with less than 10 minutes left.

Spurs’ elimination means they have only reached the Europa League quarter-finals once in the past six seasons.

Manchester United, who beat French side Saint-Etienne 4-0 on aggregate, will be the only British side in the last-16 draw on Friday (12:00 GMT). Spurs pay price for Alli red card

Despite them needing to score at least twice as the match approached half-time, few would have written off Spurs.

But they were then reduced to 10 men after Alli’s poor tackle.

The 20-year-old England midfielder has previously shown glimpses of a fiery streak, alongside his technical brilliance, but this was the first red card of his career.

Alli felt referee Manuel de Sousa should have given him a free-kick close to the halfway line and briefly remonstrated with the Portuguese official before turning and launching into Genk midfielder Brecht Dejaegere with a studs-up challenge.

Tottenham did not escape without damage, though.
Alli was shown Tottenham’s first red card in 93 games, since Vlad Chiriches was sent off against Stoke in May 2015 Spurs’ European struggles continue

Tottenham, particularly since Mauricio Pochettino became manager, have often drawn praise for their fearless and confident approach, and they have become regular title challengers.

But it is a different story in Europe.
In truth, they should still have progressed despite Alli’s dismissal, only poor finishing costing them in a dominant performance against a team containing a man extra.

The blame largely lies in a lifeless performance in Belgium.

Gent’s first-leg victory was only their third win in 13 matches, with their recent form dropping them to eighth place in a Belgian top flight ranked as only the ninth-best European league.

Indeed Belgian leaders Club Brugge, the reigning champions, lost all six matches in their Champions League group, including a 3-0 home defeat and 2-1 loss against Leicester City.

While Tottenham’s deficiencies were clear, Gent deserve credit. They were organised, disciplined and clinical when their rare chances arrived.

Perbet, who scored the winner last week, put the tie beyond Spurs with the away team’s first shot on target at Wembley, sparking exuberant scenes among the 10,000 visiting fans. Post-match reaction

Tottenham manager Mauricio Pochettino:
“I am very disappointed. Once again we were excited to play today in front of our fans. We started well and scored. The tie was open but we conceded a goal in one action in the first half. After that it was complicated.

“I was very proud. We were brave and created chances and scored the second but could not get another. In the second half we played with energy.” Wembley woes still apparent for Spurs….

Tottenham, who remain without a trophy since 2008, will focus their attention on trying to catch runaway Premier League leaders Chelsea.