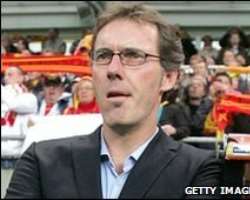 Blanc's Bordeaux side ended last season without a trophy

World Cup winner Laurent Blanc will quit as Bordeaux coach and replace Raymond Domenech as manager of France after this summer's World Cup.

The 44-year-old former Manchester United defender guided Bordeaux to the 2009 league and cup double but his side ended this season without a trophy.

The French federation confirmed: “We have reached an agreement with Laurent Blanc as the coach of France.”

He missed the World Cup final after being controversially sent off, following an altercation with Slaven Bilic, in the 2-1 semi-final victory over Croatia.

The centre-back played 97 times for his country, scoring 16 goals – while in his club career, he helped Auxerre to a Ligue 1 and Coupe de France double and went on to play for Barcelona, Marseille and Inter Milan.

He finished his playing career at Manchester United, moving to Old Trafford in 2001, and was part of the 2003 Premier League title-winning squad, although he started only 15 league games that season. 606: DEBATE

Is Blanc the right man for France?
BBC Sport's Peter Scrivener
Blanc retired at the end of that season, before being appointed Bordeaux coach in 2007.

But, after the double success in 2009, his side finished sixth in the league this season and were knocked out of the Champions League at the quarter-final stage by fellow French side Lyon.

Domenech, who replaced Jacques Santini as France boss in 2004, had long bore the brunt of fans' frustrations following a disappointing Euro 2008 campaign where they picked up only one point and finished bottom of their group.

France start their World Cup campaign against Uruguay on 11 June – while Blanc's first taste of competitive action as national boss will come when the Euro 2012 qualifiers begin in September.