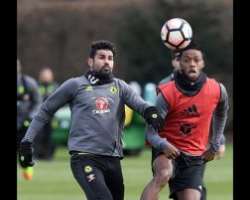 Costa has been in fine form for Chelsea this season, and his 15 Premier League goals have helped the Blues to the top of the table.

But the Spain international was linked with a move away from Stamford Bridge to the Chinese Super League last month .

The striker is yet to agree terms over a new deal with Chelsea, but Conte is confident the 28-year-old will stay in west London. Antonio Conte is confident Diego Costa will stay at Chelsea “I don't know about this situation,” Conte said. Chelsea star Diego Costa has 15 Premier League goals this season “I am confident [he will stay here] but not it is important to keep the great concentration for the game against Wolves (tomorrow).

“We must go into the next round and then this situation will be better to face in the summer.”

Chelsea are thought to be preparing a £220,000-a-week contract for Costa to keep the Spain international happy in west London.