'Warrior' Luiz playing through the pain for Conte and Chelsea 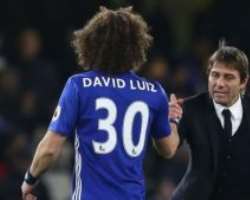 Chelsea defender David Luiz has been described as “a warrior” by manager Antonio Conte, who afforded his squad some time off this week following a hectic schedule.

Luiz has become a fixture in Chelsea’s three-man defence alongside Gary Cahill and Cesar Azpilicueta, despite struggling with a knee problem.

That did not prevent him smashing in a 30-yard free-kick in last month’s 1-1 draw at Liverpool and Conte has hailed the Brazilian’s commitment to the cause.

“He’s playing with a little pain in his knee, but he’s a warrior,” said Conte ahead of Sunday’s trip to Burnley.

“He’s playing very well and I hope he can continue this way. He has a great attitude and a great will to fight despite sometimes having a bit of pain.”

The clash at Turf Moor comes at the end of a week which saw Conte allow his players some extra time off to recharge their batteries following gruelling Premier League encounters against Liverpool and Arsenal.

And the Italian – who used the time to travel to Turin and watch former club Juventus take on Inter in Serie A – emphasised the importance of unwinding in the midst of a busy campaign.

“After the game against Arsenal I wanted to give them a break of one more day off because I thought they deserved this because we had an intensive week with three games in seven days,” he said.

“But sometimes there is a moment when it’s important also to have days off to relax and for your family, to come back fresher.

“If the players want to go and relax in different countries [that’s okay], the important thing is they come back in the right way with the right attitude.”