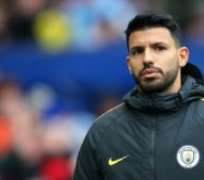 Sergio Aguero was benched for the second straight game by manager Pep Guardiola in favor of the red-hot Gabriel Jesus , and even before kickoff the rumors of his exit began to materialize.

Teams linked with Aguero in the last 24 hours include Chelsea, Real Madrid, and Inter Milan.

The Mirror claimed that Chelsea would look to Aguero in the event of Diego Costa 's exit from Stamford Bridge, although that looks far less likely now that Costa posted on social media to shatter any ideas of his discontent with the Blues. Accompanied by a picture of him playing for the Blues,  Costa wrote on Instagram before this weekend's 3-1 win over Arsenal, “They talk too much s—! Come on Chelsea!”

On Friday, The Mirror had written a report that Aguero was prepared to ignore interest from Madrid and ask for a new deal at City, but with a second game on the sidelines, questions are surely growing if that would be the case.

The most intriguing report comes from The Express , who claimed Sunday morning before City's kickoff against Swansea City at the Etihad that Inter was seriously considering a move for Aguero. With Pep apparently hoping to convince Pierre Emerick-Aubameyang to make his way to the Premier League, it could force the 28-year-old Argentinian to look elsewhere. Inter last played in the Champions League in the 2011/12 season, but have been slowly building their way back up the Serie A table, currently in fourth sitting five points behind Roma in the final Champions League place. Their downswing coincided with a similar dip by rivals AC Milan, but Inter have worked their way back towards the top, while AC continues to flounder in the middle of the pack.

It's important to note that just last week, Aguero's agent claimed he has no desire to leave Manchester City, with his contract set to expire in the summer of 2019. Still, rumors of Aguero's exit will only grow after it took Jesus just 11 minutes to score the opening goal for Manchester City in Sunday's game.