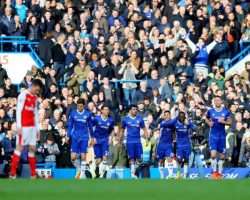 Chelsea delivered a hammer blow to Arsenal’s Premier League title hopes as Antonio Conte’s men ran out 3-1 winners at Stamford Bridge to send the Blues 12 points clear of the Gunners.

Despite a bright start from the visitors, it was Chelsea who took the lead through Marcos Alonso who headed the Blues into the lead with his effort in the 13th minute.

Eden Hazard then made it 2-0 shortly after the break with his stunning solo effort that saw him race past three Arsenal players and slot the ball into the back of the net before former Gunners star Cesc Fabregas took advantage of a woeful Petr Cech error to lob into an empty net five minutes from time, with Olivier Giroud’s late consolation goal providing no respite.

Chelsea now sit 12 points clear of Arsenal in first place, with the Gunners in third though Liverpool and Manchester City can overtake the Gunners should they both win this weekend.

The last time these two sides met was in September when goals from Alexis Sanchez, Theo Walcott and Mesut Ozil secured a 3-0 comprehensive win for the Gunners at the Emirates Stadium.

The result took Arsenal three points clear of the Blues who, as a result, languished in eighth place but it triggered off a change in formation for Conte that inspired Chelsea onto 13 straight victories in the league.

In fact, such has been their form since their loss in north London that Chelsea arrived to their clash with Arsenal on Saturday nine points ahead in first place.

Despite that, it was the Gunners who threatened first at Stamford Bridge when Mesut Ozil stole possession from the hosts within two minutes to cut-back to Alex Iwobi, whose subsequent low effort took a deflection and flew just wide of the far post.

Arsenal were the better of the two sides in the opening stages, and they managed to dominate proceedings in the middle of the park despite Wenger’s lack of options in that area before the game.

With Granit Xhaka suspended, Aaron Ramsey injured alongside Santi Cazorla and Jack Wilshere out on loan, the Arsenal manager – sitting in the stands due to his four-game touchline ban – was forced to startAlex Oxlade-Chamberlain and Francis Coquelin in central midfield.

And the pair did well, with Chelsea being forced to use their pace down the flanks to stretch the Gunners early on. But it would prove to be the route Chelsea would exploit to open the scoring in the 13th minute when Victor Moses’ ball found Pedro on the right, who crossed into the box for Diego Costa.

The striker could only head the ball onto the crossbar, but Alonso reacted quickest to out-muscle Hector Bellerin and head in the bouncing ball to give Chelsea a 1-0 lead.

While going behind was bad enough for Arsenal, it was the subsequent injury to Bellerin which proved even worse. The full-back appeared to be caught on the head by Alonso in the build-up to the goal, which required him to receive medical treatment.

He failed to recover and, with Arsenal fans fuming about what they perceived as an apparent foul on the Spaniard, Bellerin walked straight down the tunnel and was replaced by Gabriel in what was a huge blow to Wenger.

Chelsea began to have more joy on the left in the absence of Bellerin and, when Nemanja Matic found Alonso with a cross-field pass, the Spaniard crossed to Pedro who forced Petr Cech into an awkward save.

Arsenal did, however, have some joy down the other end of the pitch when Oxlade-Chamberlain found substitute Gabriel at the far post following a corner, who then tested Thibaut Courtois with a header that was superbly dealt with in the 37th minute.

Ozil saw his low effort following a well-worked attacking move saved by Courtois just before the break but, when Arsenal returned from the break, they found themselves 2-0 down just seven minutes later.

In what was a moment of brilliance from Hazard, the Belgian raced past Coquelin, leaving him flat on the pitch as a result, and Laurent Koscielny before firing in a low effort that flew past Cech.

The goal doubled Chelsea’s advantage, sent Conte into the stands where he hugged the home fans while Chelsea owner Roman Abramovich was seen high-fiving friends and family in his box.

But Arsenal attempted to battle back, and they had a good chance to do so minutes later when Theo Walcott – looking for his 100th goal in all competitions for Arsenal on Saturday – nearly made contact with Monreal’s cross but Gary Cahill was on hand to deflect it out for a corner.

Walcott could not make it 100 goals for the Gunners as he was taken off for Danny Welbeck, but the striker nearly got himself onto the scoresheet when he headed Shkodran Mustafi’s cross toward the far post – only for Courtois to dive and make a one-handed clearance.

Cech then suffered a moment to forget with five minutes left on the clock when his attempted pass to his defence was latched onto by Fabregas, who dinked into an empty net before Giroud headed home from a Monreal cross in the 91st minute.

The win keeps Chelsea comfortably atop the Premier League table while Arsenal have now lost five straight games at Stamford Bridge and sit in third.