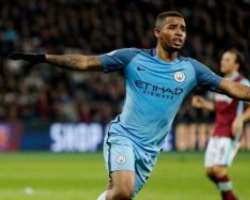 S uddenly there is an impetus to Manchester City's season, a verve, a velocity, a samba swagger, a one-touch destructiveness. The introduction of Gabriel Jesus, the 19-year-old who cost £27million, has made a devastating difference.

A new star has arrived in the Premier League as Jesus took Sergio Aguero's place and, just maybe, the first step to taking his long-held mantle as the league's best striker as he also claimed his first goal in English football.

That may all be wildly premature but, now, we see what all the fuss is about, why Pep Guardiola had such faith in the Brazilian forward with the thick, furrowed brow but who plays with an astonishing sharpness and freedom. A forward line of Jesus, 21-year-old Leroy Sane and 22-year-old Raheem Sterling was a glimpse of the future and was too much in the present for West Ham. “It's like a water melon,” Guardiola later said of Jesus. “You have to open and see it.” This was an appetising, fresh glimpse.

City have now played Slaven Bilic's side three times this season with an aggregate score of 12-1. They have faced them twice in this stadium in the last month alone, claiming nine goals. On such a vast pitch, in such a big arena, and with West Ham playing so open – why was Michail Antonio so far forward? – they simply could not get close with the speed of City's play breath-taking in a stunning first-half.

It was a result that drew City level with fourth-placed Liverpool and just a point behind Tottenham Hotspur in second and on this kind of evidence they could go on a run that might just shake up the title race. In the directors box, indeed, was Chelsea manager Antonio Conte and he also knows that City now have a favourable sequence of league fixtures. This could – just – get interesting although obviously it remains in Conte's iron grip. Yaya Toure makes it 4-0 from the penalty spot

J esus arrived in the January window and has been put straight in by Guardiola – before this he had delivered an eye-catching cameo against Spurs and an impressive start in the FA Cup – with Aguero on the bench, dropped, rested, but left out whatever the reason and he has a fight on his hands to remain top striker.

Both players were on the pitch at the end, with Jesus pushed wide in that front three, but he appeared more effective through the middle. He, most definitely, is a challenger to Aguero's previous supremacy especially with the sense that he stylistically may be more to Guardiola's liking.

There was another big call by the City manager – and an obvious, overdue one. He dropped Claudio Bravo and it had to happen given the goalkeeper's appalling, jittery form summed up in one damning statistic: from nine shots on target he has faced in 2017 he has saved just one.

A nd so it was Willy Caballero who took his place and became a spectator, almost, even if his presence certainly appeared to breed a little more confidence in a City back-line which may also soon have the option of bringing back Vincent Kompany. The captain, also, was on the bench.

City were aided by two more factors: West Ham's mistakes and the fact that, this time, they capitalised on those opportunities. Guardiola hailed Jesus's desire to be “something in world football” and that hunger was evident and caught on. City had a desire to hurt their opponents and did so clinically when Aaron Cresswell carelessly played the ball infield from halfway but, unfortunately, straight to Kevin De Bruyne who ran forward.

The defenders – including Jose Fonte, the £8million signing from Southampton, who endured a torrid debut – backed off and De Bruyne Sergio Aguero started on the bench

s lipped the ball wide to Jesus who played a clever, first-time return pass square to his team-mate who, again first-time, easily swept it low into the net.

Soon it was two goals. Again there was a ruthless, skilful execution as Sane collected De Bruyne's pass, nut-megged Sam Bryam and easily beat Fonte to cross low inside the six-yard area for David Silva to side-foot home. It was that simple; that skilful; that devastating.

The goals flattened the atmosphere. West Ham had been buoyed by recent form, galvanised by the Dimitri Payet saga and the return of Andy Carroll and it was the striker who fashioned a way for them back into this match as he won the ball on half-way and delivered an angled pass which picked out Cresswell who was suddenly clear on goal but lacked composure and spooned his shot over.

T hat was it. City broke again. Again with West Ham losing the ball, a slack pass by Pedro Obiang, and Sane intercepted quickly to pick out the run of Sterling, who stayed onside, and he had the calmness to cross low for Jesus to simply tap it past goalkeeper Darren Randolph.

It was over. West Ham could not get close. It was only a case of how many and there was just one more goal with De Bruyne curling a delicious pass from the byline for Sterling, who checked back and was caught by Fonte with his trailing leg. Yaya Toure, the token 'defensive' midfielder in this open line-up, beat Randolph from the penalty spot and the stadium rapidly emptied.

Bilic, knowing the game was up, withdrew Carroll, saving him for games to come. This one was over long before the final whistle. City had Jesus and West Ham did not have a prayer.