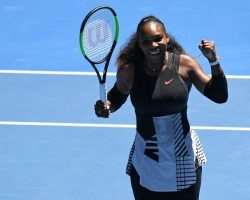 Serena Williams ended Johanna Konta’s hopes of progressing in the women’s singles at the Australian Open with a dominant 6-2, 6-3 win in the quarter-finals.

The American survived a slight wobble in the second set to come through in one hour and fifteen minutes to set up a semi-final clash with 34-year-old Mirjana Lucic-Baroni, who upset fifth seed Karolina Pliskova. The Croatian is making the last four of a Grand Slam for the first time in 18 years following her semi-final appearance at Wimbledon in 1999.

Number two seed Williams and Konta faced each other for the first time in their careers and despite the British number one coming into the game on a nine-game winning streak, she was unable to put her opponent under pressure consistently during the game. The former world number one can break Steffi Graf’s open era record of 22 Grand Slam women’s singles titles if she triumphs at Melbourne Park.

Williams dominated the first set breaking Konta first in the fourth game and then in the eighth game to wrap it up 6-2 in just over half an hour. The second set started on the same note, but the Briton showed fight coming back from 0-40 down to hold serve and looked to be getting back into the match when she went 3-1 up by breaking Williams.

The 35-year-old, however, made sure that it was the only wobble in the match, as she reeled off five straight wins to take the set 6-3 and book a place in the last four.

“Johanna Konta has been playing so well. I was in the locker room watching her clean up her matches, she is a future champion here for sure, so I am pleased to get through this,” Williams said after the match, as quoted by BBC Sport.

“I got a little frustrated with my serve, but I told myself ‘don’t get Babyrena’ and focused on enjoying myself out here. Today I felt I can do this, it is such a great opportunity for me,” the world number two added.

Williams will be favourite going into her match against Lucic-Baroni and could meet older sibling Venus Williams in the final, as she plays fellow American Coco Vandeweghe in the other semi-final