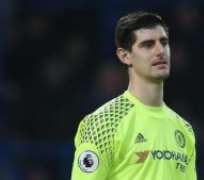 For five days, you keep your nose to the grindstone. Nine to five. Shoulder-to-shoulder on the tube, bumper-to-bumper on the turnpike. Working for the weekend.

And then it's time to parrrrrr-tay. You let your freak flag fly. Throw your hands in the air. You know the rumor mill's having a party, just like Jamie Vardy.

Quite a few big names invited to this weekend's party. YANNICK CARRASCO

With Antoine Griezmann supposedly all but agreeing to move to Manchester United — “look, we've got the no.7 all ready for you!” — the next Atlético player to be linked with Chelsea is Yannick Carrasco. The Belgian forward (winger?) was already linked back in the fall , actually, as routine part of new contract negotiations. Duly signed, the new deal includes a €100m release clause, which supposedly Chelsea (or a few of the usual suspects) just might exercise anyway. So claim Don Balon , who've never been wrong in the last 10 minutes.

RADJA NAINGGOLAN
Speaking of players “worth” €100m, AS Roma head coach Luciano Spalletti has let a few of Radja Nainggolan's tackles go to his head when claiming that his star midfielder would be worth as much as Paul Pogba.

While allowing for Pogba's age (23, five years younger than Radja) being a big factor in Manchester United's world record purchase, Spalletti made no mistake in laying it on thick for the man who's apparently still not signed the new deal in the works since the summer rumors.

“I'd have said [he's worth] the same as Pogba.”
“Radja is a complete player, one of those really strong lads. He's made of different stuff to normal players and we have a few of those different players in our locker room. The only real difference between Nainggolan and Pogba is down to age, but for their worth on the field and the contribution they make during a match, I think the comparison holds up.”

Let's pump the brakes, Luciano. DIEGO COSTA
I thought we were done with Costa rumors for at least a few months, but here's Duncan Castles for the Sunday Times to prove me wrong , running with the story of Chelsea slapping a £130m price tag on Costa. BOOM.

Well … I mean … wow. That's a lotta lettuce (with wages to match, no doubt). Who might be interested in paying that much for a striker in his late 20s? China of course! THIBAUT COURTOIS

Last but not least, we have a rumor that in a way is closest to being realistic. Earlier this week, Madrid radio station COPE launched the latest BS salvo in the Courtois-to-Real Madrid neverending story , claiming that the Chelsea goalkeeper “remains crazy” for the city and so and so forth.

Those rumors have now evolved to include a transfer figure as well, €30m to be exact, according to the Mirror . If you're a believer in the smoke-to-fire theory, this might be semi-concerning. Otherwise, come along and yawn with us.