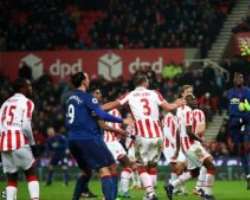 Substitute Rooney curled in from the left-hand corner of the penalty box for his 250th United goal, one more than Sir Bobby Charlton.

Stoke looked set for a third straight Premier League win, clinging to a lead given to them when Juan Mata poked Erik Pieters’ cross into his own net.

But their 25th and final effort at goal preserved a 17-game unbeaten run, albeit if the dropped points mean they lose ground in the race for the top four.

They are three points behind fourth-placed Arsenal and 11 off leaders Chelsea, who both play on Sunday.

Rooney, so often the fulcrum of the United side since joining from Everton as an 18-year-old in 2004, has had to make do with a bit-part role under Jose Mourinho this season.

Indeed, this 546th appearance came from the bench, but still delivered a moment of history.

United had been frustrated for so long by Stoke’s stoic defence and their own wastefulness, and a free-kick awarded just outside the home penalty area looked to be the visitors’ last chance as five minutes of added time ticked down.

Rooney, largely ineffective since joining the action, looked prime to cross, but instead arced a wonderful, dipping, right-footed shot inside the far post past the previously unbeatable Grant.

The 31-year-old, who surpassed Charlton’s England scoring record in 2015, beat the club mark that had stood since 1973 and gave United a point that looked to have gone. ‘Wayne becomes a legend’ – what they said

Manchester United captain Wayne Rooney: “It means a hell of a lot. It is a great honour and I am very proud. It is difficult at the minute to be over-pleased because of the result, but in the grand scheme it is huge honour.

“It is not something I expected when I joined. I am proud and I hope there is more to come.

“The players who have played for this club have been world class.”

Former record-holder Sir Bobby Charlton: “I would be lying to say that I’m not disappointed to have lost the record.

“However, I can honestly say that I’m delighted for Wayne. He deserves his place in the history books.

“He is a true great for club and country, and it is fitting that he is now the highest goalscorer for both United and England.”

Former Manchester United boss Sis Alex Ferguson: “Wayne thoroughly deserves his place in the history books of this great club and I am sure that he will go on to score many more goals.

“Well done Wayne, I am absolutely delighted for you, you have been a great servant to this club and long may it continue.”

Stoke City manager and former Manchester United striker Mark Hughes: “It is an outstanding record and won’t be surpassed. It has taken 40-odd years for Sir Bobby’s record to be broken which shows how high a mark it was.” Wayne’s world – the stats

United frustrated until the last

Rooney’s intervention was all the more dramatic given the struggles of his team-mates on a bitter afternoon in the Potteries.

United had almost all of the play – 65% of the possession, 25 efforts on goal to Stoke’s six, almost a third of the game was played in City’s defensive third – and yet the visitors could barely find a way through.

Soon after deflecting into his own net, Mata dinked over from close range with the goal at his mercy, while Grant made excellent saves from Marouane Fellaini and Paul Pogba.

Zlatan Ibrahimovic was strangely subdued and on more than one occasion he opted to pass when an effort on goal looked the better option.

An isolated figure in the first half, the former Sweden forward gained more support in the second – Marcus Rashford providing pace and incision down the left, fellow substitute Jesse Lingard hitting the top of the crossbar.

It all looked to count for nothing until Rooney’s late moment of magic gave the visitors a point they totally deserved.

The touches Zlatan Ibrahimovic had in the first half are shown on the left. His greater involvement in the second half (on the right) was indicative of United’s greater support of their frontman Tireless Potters remain on the up

Despite the desperate disappointment of seeing victory snatched away, Stoke can take encouragement from further evidence of continued improvement.

As recently as 31 December, a five-game winless run had them only seven points above the relegation zone, but they have since won two and drawn one.

Conceding 32 in their first 19 matches, they have shipped only two in the past three – and on Saturday keeper Grant’s brilliance was matched by Bruno Martins Indi, who put in a colossal performance at the heart of defence.

Though attacks were largely limited to counters, Marko Arnautovic created problems down the left and Peter Crouch was a handful for the United defence, despite playing a lone hand up front.

A day that began with new signing Saido Berahino being paraded on the pitch ultimately ended with a sucker punch, but realistically Stoke should see this as point gained rather than two dropped. Man of the match – Lee Grant (Stoke City)

Wayne Rooney will take the headlines, but it was the man he ultimately beat who put in the best performance. Lee Grant seemed unbeatable in the Stoke goal and it took a moment of brilliance – and history – to change that. ‘We need to pick ourselves up’

Stoke City manager Mark Hughes: “We are disappointed but we need to pick ourselves up. We were within seconds of beating a very good Manchester United team.

“My only criticism to the guys is that we didn’t keep the ball long enough. We are good enough to do that but we needed more care to get up the other end of the pitch.

“In the end we tried to protect what we had and I can’t criticise what we did for the free kick.”s

Manchester United boss Jose Mourinho: “It was a big game with two teams in the beginning trying to win. But after 25 minutes one team tried to win and the other tried to defend, which they did amazingly well.

“We missed unbelievable chances. We hit the post, the keeper saves, we missed chances. The opposition goalkeepers are always amazing against us.”

What’s next?
Out of the FA Cup, Stoke do not play again until 1 February, when they host Everton in the Premier League.

United have two games before then, holding a 2-0 lead when they travel to Hull in the second leg of the EFL Cup semi-final on Thursday and entertaining Wigan in the FA Cup on 29 January (16:00 GMT, live on BBC One).