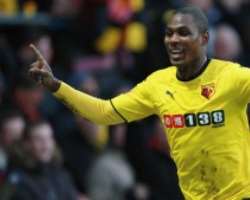 West Bromwich Albion are in talks to sign Watford striker Odion Ighalo, according to Sky sources.

A source has told Sky Sports News HQ that a fee of £17m has been agreed between the clubs but another source claims talks are not yet that advanced.

The 27-year-old Ighalo thrived under Quique Sanchez Flores last season but has struggled to recapture his best form in Walter Mazzarri’s side this term.

He has only scored twice this season in all competitions – after notching 17 last term – while the Hornets have struggled for consistency in both their starting line-up and their general Premier League form. Ighalo has scored 39 goals in 98 appearances for Watford

Ighalo joined Watford from Udinese in 2014 and has scored 39 goals in over 98 appearances.

He is a Nigeria international with 12 caps and previously spent time on loan at Cesena and Granada.