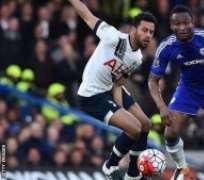 John Obi Mikel, Chelse legend and multiple-troph winner ens a hertfealt letter to Chelsea fans, where he officially announced his departure from the club where he spent ten years.

In  the open letter he posted on Twitter , addressed to all of us Chelsea fans, his Chelsea family, he wrote:

To my Chelsea family,
After ten years, 374 appearances and eleven trophies, it is time for me to say goodbye.

Where do I begin? I joined Chelsea as a 19-year old kid from the Norwegian Premier League, making my debut in the Community Shield. I say goodbye as a Champion of England, a Champion of Europe, and proud captain of my national team.

To play in the Premier League, the best league in the world, is every professional player's ambition. But to play for Chelsea, to become part of the Chelsea family, to work with some of the best managers and players in the world, has truly been an honour.

Every achievement I have been part of in my time at Chelsea holds a special memory: my first goal, against Macclesfield in 2007 (even though there were only five more after that!). The nail-biting end to the 2010 season – securing the title on the last day, scoring a record 103 goals in the process, and winning the FA Cup a week later. Didier's extra time winner against Manchester United in the 2007 FA Cup Final. Beating two of our biggest London rivals in League Cup finals. Winning the Europa League, in Amsterdam, with one of the last kicks of the game.

Then there was Munich. We were desperate to make up for the disappointment of the 2008 final, but trailing with just two minutes to go, against Bayern, in their own stadium, it seemed that once more lucky was against us. But that night, with lions on our chest and the fans behind us, we fought. Up popped Didier, the rest is history, and to date we're still proudly the only team in London with a European Cup.

None of this would have been possible without the wider club's support. To Mr Abramovich, the club's staff, coaches, physios, and to the managers I played under at Chelsea, I want to say thank you.

But my biggest thanks must go to the Blues fans. You brought me into the Chelsea family, you sung my name, and were there with us every step of the way. Thanks to your support, on nights like in Munich, you made the impossible possible.

As you will know, I haven't featured as much this season as I would have liked, and at 29 I still have many years in the game ahead of me. With this in mind, I feel now is that time to seek a new challenge. I'm delighted to be joining Tianjin TEDA FC in China, at a time that the Chinese Super League is really taking off, and I look forward to helping Tianjin TEDA FC continue to grow both on and off the pitch in the next few years.

To everyone at Chelsea — goodbye, and thank you. You will always be part of who I am, and I wish you the best of luck. I could not be happier to be saying goodbye with the club back where it belongs — top of the league.