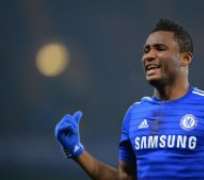 Mikel, who failed to make a single appearance for Antonio Conte’s side this season, had a medical in the port city some 130 kilometres from Beijing on Thursday and the Asian Football Confederation confirmed the deal on Friday.

The 29-year-old, who spent more than a decade at Stamford Bridge, was given a free transfer by the London club and will earn 140,000 pounds ($173,432) a week in China, according to local media reports.

After joining Chelsea in 2006, Mikel was part of a squad that won a Champions League crown, two Premier League titles and four FA Cups.

Chinese clubs have made several high-profile signings over the last month with Argentine striker Carlos Tevez moving to Shanghai Shenhua for a reported 84 million euros ($87.65 million).

Less than a week later, Brazilian midfielder Oscar joined local rivals Shanghai SIPG from Chelsea in a deal believed to be worth 60 million euros.

At the end of December, Cristiano Ronaldo’s agent said the World Player of the Year had turned down the chance to leave Real Madrid for an unnamed Chinese club for a transfer fee of 300 million euros ($315.24 million).

Amid the spending spree, the country’s General Administration of Sport described the excess of some Chinese clubs as “a grave phenomenon” on Thursday.