We will stick to 3-4-3 formation despite defeat at Spurs: Conte 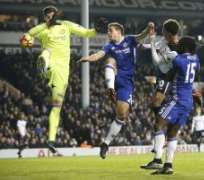 Even after Chelsea's 13-match winning run ended, Antonio Conte found something to laugh about.

In the three months since Chelsea adopted the 3-4-3 formation Conte favored in Italy, the team has powered to the top of the Premier League.

So Conte was bemused by the suggestion he might consider abandoning the three-man defense that was penetrated so easily by Tottenham in Wednesday's 2-0 loss but had previously been serving Chelsea so well.

“We found a good balance with this formation and we continue with it,” Conte told reporters at White Hart Lane. “But it's very strange you ask me after a defeat after 13 wins in a row if I'm thinking of changing the formation.

“I am seeing that to stop us other teams are changing the formation.”

Tottenham did just that; adopting a three-man defense and successfully impeding Chelsea, particularly Diego Costa. The league's top scorer has only failed to score in three of Chelsea's last 10 games, including both league meetings with Tottenham now.

Costa's 14 goals have helped Chelsea to establish a lead at the summit over Liverpool that remains at five points despite the Spurs setback.

Identical goals were the underdoing of Chelsea, which couldn't contain the aerial threat posed by Dele Alli either side of halftime. On both occasions, Kyle Walker released Christian Eriksen on the right flank and crosses were delivered into the penalty area where Alli rose between Victor Moses and Cesar Azpilicueta to head into the net.

Azpilicueta was the only one of Chelsea's trio of center halves close to Alli, with Gary Cahill and David Luiz committed elsewhere and unable to deny space to one of the Premier League's more creative, young midfielders.

Chelsea has conceded four goals in two games — more than in preceding 12 games.

“It's normal to work in one system, one formation,” said Conte, the former Italy and Juventus coach halfway through his first season in England. “When you change a lot and use a different system it means you don't work a lot with this formation. Every day you try to improve your system and try to provide different solutions — with the ball and without the ball.”

Conte first adopted a three-man defense during his last trip to north London in September when Chelsea was trailing 3-0 at halftime to Arsenal, while already reeling from a loss to Liverpool in its previous league game.

The tactical tweak stemmed the flow of goals in the second half at Arsenal. Chelsea responded to the Arsenal loss by going on the 13-match winning run that Tottenham ended to prevent its west London rival from setting a new single-season league record.

“We are disappointed but also we must be pleased,” Conte said, “because to win 13 games in a row is not easy in this league, and also today we lost against a good team, a really strong team.”

Tottenham, whose hopes of a first title since 1961 were ended by Chelsea last season, is seven points behind Conte's side in third place while Liverpool is second.

And Conte believes Chelsea, champion in 2015 under Jose Mourinho, is more resilient than it was during the September slump.

“Don't forget Tottenham fought last season for the title,” Conte said. “Mauricio Pochettino has worked with his team for many years and they are improving, and they are one of the six teams that can fight to the end to win the title, or a place in the Champions League.

Sports Daily newsletter
Sports news with a focus on D.C. area teams.
Sign up
“Now we have to restart, to continue to work and this defeat is totally different if you compare with our defeats in September (against Liverpool and Arsenal), because at that moment we were not a team. Tonight we showed we are a strong team and this is important.”

The next major test of Chelsea's title credentials will come on the final day of January with a trip to Liverpool.