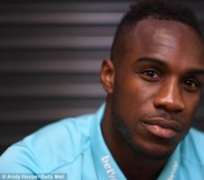 The 26-year-old, who has played striker, midfield and defense for West Ham this season, is believed to have caught the interest of Conte.

Antonio, a physical, bullish player, has scored eight times for the Hammers this campaign, earning an England call-up in the process.

Conte has already seen the impact of Antonio having traveled to the London Stadium in October for the EFL Cup, when Chelsea was beaten 2-1.

The Italian is keen to add back-up to his attack with Michy Batshuayi his only option other than Diego Costa in the striker role.