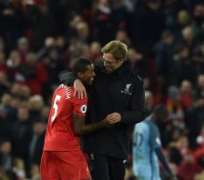 Chelsea’s record-equalling 13th consecutive victory against Stoke City earlier in the day left their closest challengers looking at respective nine and 10-point deficits when they kicked off at Anfield, although this did nothing to dull Liverpool’s senses as Georginio Wijnaldum headed them into an ultimately decisive early lead.

For much of the first period, Jurgen Klopp could claim tactical mastery over his old Bundesliga sparring partner Pep Guardiola in the City dugout and it is Liverpool’s superstar manager who now looks the most likely challenger to Antonio Conte in the battle for the league title.

Guardiola’s men carried more threat after half-time, but they will drop to fifth in the table if Arsenal and Tottenham Hotspur pick up wins over Crystal Palace and Watford on New Year’s Day respectively.

A grapple for a place in the top four would mark something of a downgrade on Guardiola’s previous exploits in charge of Barcelona and Bayern Munich, but Klopp, who ultimately laboured under his rival’s latter successes while in charge of Borussia Dortmund, might just have introduced him to a new reality.

City began confidently, but the breakthrough came for the hosts on their first attack of note in the eighth minute.

Adam Lallana drifted in from the left and his floated cross was met by Wijnaldum, whose perfectly-timed run allowed him to tower over Aleksandar Kolarov and plant a header past Claudio Bravo.

The early advantage allowed Liverpool to operate in a more composed fashion than the frenetic pressing normally associated with Klopp’s sides, while City’s attempts to mix short and long passing resulted in them appearing ragged in possession by the half’s midway point.

Emre Can, included to bolster the Liverpool midfield at the expense of striker Divock Origi, arced a shot over as the half-hour approached and City wore an increasingly laboured look.

Lallana should have had the chance to double the lead at the break, but, having pickpocketed Yaya Toure, he errantly darted offside before Roberto Firmino sent him through on goal.

Liverpool fullback Nathaniel Clyne failed to control convincingly and prodded wide having ghosted into the box within a minute of the restart.

City’s showing remained fractured, although David Silva sashayed in from the right in the 55th minute and drove narrowly beyond the far post, while a stretching Raheem Sterling – barracked throughout at his old stomping ground – volleyed Toure’s raking pass into the side-netting.

Those chances sparked the visitors’ most convincing spell of the contest, tempo suddenly injected into their play, and Wijnaldum unwittingly blocked from Kevin De Bruyne.

There would be no celebrations for the travelling support – featuring City captain Vincent Kompany – in the Anfield Road End and Guardiola has plenty to ponder as he enters 2017 with a team still not as smoothly grooved as Klopp’s Liverpool.

Key Opta stats:
– Liverpool have won four consecutive league games against Manchester City for the first time since 1981 (a run of seven).

– Pep Guardiola has now suffered twice as many league defeats this season (four) as he did in the entire 2015-2016 Bundesliga campaign with Bayern Munich (two).

– Adam Lallana has made seven assists in the Premier League this season (in 17 appearances) – his most in a single campaign.

– Lallana also ends 2016 having been involved in 21 goals in the Premier League (11 goals, 10 assists) – no midfielder in the competition has had a hand in more.

– The Reds won a Premier League game having only registered one shot on target for the first time since August 2013 (1-0 v Aston Villa).

– Sergio Aguero did not record a touch in the opposition box in this game.