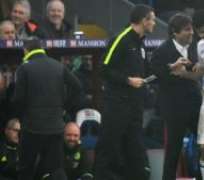 A year to the day since Chelsea sacked Jose Mourinho, having sat a point above the relegation zone, his permanent successor Antonio Conte sent the Blues nine points clear at the top of the Premier League.

Just as Mourinho had done three days before, after his Manchester United side beat Crystal Palace 2-1, Conte came striding onto the Selhurst Park pitch at full-time, punching the air with both fists, gleefully, following his side's 11th consecutive league win—a club record.

This was a performance his predecessor would have been proud of. The Italian's side ground out 1-0 victory, sneaking a lead moments before half-time through the prolific Diego Costa, before shutting the game down in the second half. Alan Pardew's Palace battled, desperate for points with this being an eighth defeat in 10 games, as the worst form side in the league.

Small disgruntled corners of Selhurst Park had urged fans to stage a walkout in the 21st minute, a protest against Pardew's reign. If any had decided to, the impact was insignificant or may, perhaps, have been missed through the thick fog that hung low across the ground.

The mist added to the sleepy feel of a lunchtime kick-off, with it taking 20 minutes for the game to threaten to spark into life. Martin Kelly managed to get in behind Marcus Alonso, down the right, and pulled his cross back to the penalty spot for the oncoming Jason Puncheon. The biggest, juiciest chance of the game fell to Puncheon but the winger failed to adjust his feet in time. The ball came off his heel and wide of Wayne Hennesey's goal; Pardew winced as the league leaders were let off.

Two minutes later marked the only downside to Chelsea's afternoon, as Costa's angelic run came to an end in the 22nd minute. After 11 consecutive matches without seeing a yellow card, the Spaniard's name was pencilled into Jon Moss' book for dissent. He will miss the visit of Bournemouth to Stamford Bridge on Boxing Day but looks set to be available for the trip to Tottenham Hotspur. It will be a quiet Christmas for Costa. Antonio Conte at Stadium of Light, Sunderland, December 14. Conte’s Chelsea will be top of the Premier League at Christmas. REUTERS / LEE SMITH

But he made the most significant mark on this game two minutes before the interval. Cesar Azpilicueta picked the ball up midway into Palace's half and delivered a delicious cross to the far post where Costa muscled his way into space and sent his header looping past a helpless Hennesey for his 13th goal of the season. The goal deflated Palace as they headed in for the interval.

At half-time, cheerleaders dressed in red sparking Santa Claus outfits completed a lap of the pitch, throwing gifts to the Selhurst Park crowd. An equalizer would have been sufficient for them this Christmas.

But Conte's side returned with added determination, as N'Golo Kante tested the reflexes of Hennesey seven minutes into the second-half and Marcus Alonso sent a shot into the side netting.

Chelsea had a chance to gift-wrap the points with 20 minutes to go when Eden Hazard danced into the penalty area and delivered to substitute Cesc Fabregas. The Spaniard hit his shot first time but it was straight at the goalkeeper.

Hennesey was helpless, however, when Alonso lined up a free-kick from 20 yards out with four minutes remaining of the match. The Spaniard whipped an effort over the wall that curled away from the scrambling Welshman but crashed off the frame of the crossbar.

A third successive 1-0 victory was ensured as Conte added defensive numbers to his team with Branislav Ivanovic coming off the bench to see Chelsea ease to the full-time whistle.

The Italian celebrated with his players and fans in the away end at Selhurst Park with Chelsea set to have at least a six-point lead at the top of the tree on Christmas Day.