Alex Iwobi: I was racially abused by Arsenal fan after Everton miss 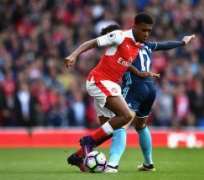 The 20-year-old has impressed for the club since making his Premier League debut earlier in the year.But after going 2-1 down to Everton at Goodison Park , Arsenal pushed forward in search of a late equaliser. Arsenal’s Alex Iwobi was abused on social media And following a scramble in the box, Iwobi’s goal bound effort was incredibly blocked on the line by Leighton Baines and cleared to safety.After the match, Iwobi posted screenshots of reaction from supporters on Snapchat. A screenshot of message received by Alex Iwobi A postive message sent to Alex Iwobi In one picture, Iwobi is told to “go back to Nigeria” on Twitter.However Iwobi also posted an image of a supportive message he received which said: “People learn from their mistakes and he will only get better.”

To which he replied: “People like this I respect, I tried but was unfortunate I apologise.”