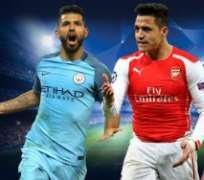 Arsenal’s Champions League curse struck again on Monday as they were drawn against Bayern Munich in the round of 16.

Arsene Wenger’s side had been hoping for a kindly draw having exited in the last 16 for the past seven seasons, usually at the hands of Munich or Barcelona.

They have faced Barcelona twice and Bayern on three occasions in that time.

Another team to have beaten Arsenal in the last 16 in the last five years – Monaco – have been drawn against Pep Guardiola’s Manchester City.

Premier League champions Leicester have a very difficult task after being drawn to Europa League winners for the past three seasons – Sevilla.

Holders Real Madrid face Italian side Napoli, while LaLiga champions Barcelona were paired with PSG – who finished runners-up in Arsenal’s group – so there would have been no escape for Wenger even if he had been second in the group.

In the other tie, Leverkusen will play Atletico Madrid.

Arsenal manager Arsene Wenger has just said: “No team is super, super favourite. Every team has a chance – it depends on the luck of the draw. The second game is at home and that gives you a psychological advantage.”

He will be hoping to avoid a last-16 exit this time.

One thing is for sure – UEFA will wheel out a footballing megastar of yesteryear to draw the balls as the tension builds towards the draw for the last 32 of the Europa League.

Giorgio Marchetti is our host – UEFA’s deputy general secretary… he begins by bigging up Leicester.

The real road to Cardiff starts here and it looks like Ruud Gullit is going to do the honours.

This is the cue for some European Cup banter about Milan.

Gullit fancies Dortmund and Real Madrid.
So now we’re ready for the draw to begin…

The draw starts at 11am in Nyon, Switzerland with group winners Arsenal and Leicester hoping to avoid progress-blocking big guns, but both could get holders Real Madrid or German champions Bayern Munich, both of whom failed to win their groups.

Manchester City, who finished runners-up to Barcelona, can only face a group winner so might yet get an easier draw – on paper of course.

Anyway, to whet your whistle, here's a list of possible permutations given UEFA do their best to keep all the big sides apart until the latter stages in a vain bid to keep the tournament interesting…