Champions League: Iheanacho scores for City in 1-1 draw vs Celtic 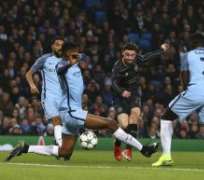 Iheanacho drove a rising shot into the roof of the net in the eighth minute to cancel out a fourth-minute goal by winger Patrick Roberts, who is four months into his second straight season-long loan at Celtic from City.

The result mattered little since City was already sure of finishing in second place in Group C while Celtic had no chance of avoiding a last-place finish. The group ended with City on nine points — six behind Barcelona — and Celtic on three points from six games.

The 20-year-old Iheanacho started in a young, makeshift City lineup and will likely stay up front for the English team this month. Aguero is suspended for the next four Premier League games following his red card against Chelsea on Saturday, his second sending-off of the season.

The Nigeria striker proved a handy back-up for Aguero during the Argentine’s first ban this season, scoring three goals in three games, and came into this match with 12 goals in 17 starts for City.

Make that 13 in 18 after he raced onto Nolito’s ball behind the defense, took one touch and planted a shot high past Celtic goalkeeper Craig Gordon.

“I have the responsibility to be striker for the team now,” Iheanacho said. “I have to prove myself and get the goals for the team.”

With nothing on the line in terms of qualification, City included two 19-year-olds — Pablo Maffeo and Tosin Adarabioyo — in defense for their Champions League debuts alongside Bacary Sagna in the unusual position of center back.

That defense endured a wobbly start and conceded a sloppy goal, even if it was well-taken by Roberts. Leroy Sane couldn’t control City goalkeeper Willy Caballero’s pass out from the back and Roberts picked the ball up on the right wing, jinked inside two defenders before placing a shot past Caballero into the corner.

Iheanacho had a flicked shot saved, Nolito had a goal disallowed and Sane fired just wide from a free kick, but Celtic also troubled City at the other end in an open game at Etihad Stadium.

Celtic had the better of the chances in the second half, and City was thankful for a save by Caballero from substitute Gary Mackay-Steven late on.

City has qualified for the knockout stage for the fifth straight season and will discover its last-16 opponent on Monday. Asked how he felt after a group-stage campaign in which City won two of its six games, Guardiola said: “We’re in the (last 16) my friend. We will see in February how we are.”

Guardiola has never failed to reach the semifinals of the Champions League in past spells in charge of Barcelona and Bayern Munich.