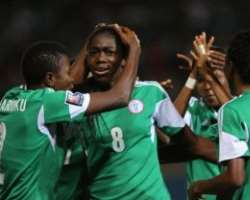 The Super Falcons have dominated this competition, winning all but two of the 10 editions played so far. In a repeat of the 2014 final, Cameroon finished as runners-up again despite enjoying massive home support. In front of Cameroon president Paul Biya, the hosts had the best of the first half, with a number of chances for Aboudi Onguene.

But the Indomitable Lionesses failed to make the most of their opportunities, even with the Falcons looking like an average team and not the defending champions. In the second half, Oparanozie, who also scored Nigeria's winner against South Africa in their semi-final, hit the decisive goal again when she broke the deadlock seven minutes from time. She followed through on a pass from the tournament's leading scorer Asisat Oshoala to give her team the trophy.

The winning goal from Nigeria was a huge blow for the hosts and the thousands of fans who filled the 40,000 capacity Ahmadou Ahidjo stadium more than five hours before kick-off. Security in the stadium was stepped up for the final because of the presence of President Paul Biya and roads were blocked for several kilometres around the stadium since early morning. Thousands more supporters were locked outside after tickets were given out free as “invites''. There were three fan parks around Yaounde set up for people to see the game. Ghana finished as bronze medallists after a 1-0 win over South Africa on Friday.(NAN)