It may be difficult for United to win league title this season: Mourinho 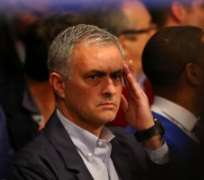 Manchester United might have left themselves too much ground to make up in the Premier League title race as they trail leaders Chelsea by 11 points after 13 games, according to their manager Jose Mourinho.

United have won only two of their last 10 league matches, a lack of killer instinct in front of goal leaving them sixth in the table.

“In the league we have not been getting the goals our performances deserve. There is no doubt we are improving, though. We know where we want to go and our destination is to be champions,” Mourinho told British media.

“Maybe we cannot do it this year. You can never tell in football but the gap might be already too large.”

On succeeding Louis van Gaal in July, Mourinho said his objective was to try to win the league in his first season.

“Sometimes when a manager takes over a new club the differences in approach are not significant,” he said.

“In that case all it needs is a little touch, just a fingerprint from the new man and you can get a lot from what was already there. Here we are trying to do something completely different.

“We could probably get better results if we weren’t trying to go in an opposite direction. I am not talking about tactical systems here. I am talking about the way this team wants to play and that is the most difficult thing in football to change.”

Mourinho will welcome midfielders Paul Pogba and Marouane Fellaini back from suspension but captain Wayne Rooney will miss the trip to his former club Everton on Sunday as he serves a one-match ban.

Mourinho is also returning from a one-game touchline ban.

“I am willing to obey the rules but I would like to see the same rules for everyone,” he said.

“I cannot kick a bottle of water, I accept that, just as I accepted the sending-off and the suspension without complaint. If those are the rules, fine. I just need to be sure they are the same for all the other managers.”