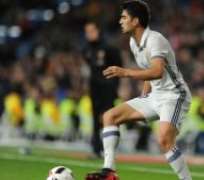 A decade on — 3,852 days if you’re counting — the name Zidane is on the Real Madrid score sheet again.

This time, however, it wasn’t Zinedine, but 21-year-old son Enzo who was making the headlines.

Just 18 minutes into his debut — and with his first shot — Enzo scored his first goal for the club in front of a sellout Bernabeu.

Substituted on at half-time, it only took Zidane until the 63rd minute to find the net, firing in a low right-foot shot from the edge of the area to make Zinedine, who is now the Real coach, the proudest dad in Madrid. That strike was one of six goals Real put past third-division Cultural Leonesa in the Copa del Rey round of 32, making the aggregate score of the tie 13-2 after a 7-1 win in the first leg.

Arguably Zidane’s finest moment in the famous white shirt came in the 2002 Champions League final against Bayer Leverkusen, scoring a stunning volley that is widely considered the greatest ever European Cup final goal.

Read: Bolt vs. Aubameyang — who wins?
Famous sons
However, Enzo isn’t the only famous footballing son making a name for himself around the world. Brazil legend Rivaldo and son Rivaldinho made headlines last year when they both scored in the same game for Mogi Mirim in Brazil’s second tier.

Visit cnn.com/football for more news and videos
Likewise Manchester City star Leroy Sane will hope to have as prolific a career as his father Souleymane, who enjoyed a successful spell in Germany and for the Senegal national team, though his son has opted to play for Germany.