Gunners dumped out of EFL Cup, beaten 2-0 by superior Saints 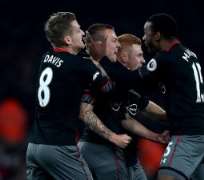 Arsenal said goodbye to their least favourite month in the worst way possible last night, crashing out of the EFL Cup with a dismal 2-0 home defeat to Southampton. This was a dream opportunity for Arsenal to make it into the semi-finals and they threw it away. If they are going to get to Wembley this season it will have to be in the FA Cup instead.

Here was a game at home against a Southampton side that had made eight changes, as Claude Puel prioritised the Premier League instead. All Arsenal had to do was beat this Saints second string, but they could not.

Arsene Wenger out-did his protégé Puel and beat him 10-8 in changes made. In doing so he deprived his side of any fluency, form or shape. Despite having a fairly first-team midfield, Arsenal were desperately poor at both ends of the pitch. They had enough of the ball but could do nothing with it, finding Lucas Perez, back up front after one month out, blunt and unable to impose himself up front.

Only in the second half could Arsenal put any pressure at all on Southampton, forcing a few saves from Fraser Forster, but nothing he found especially difficult. Even given all the changes made, it was still a poorly blown chance.

Not all credit should be taken away from Southampton, though. They did what Arsenal could not, rotating their best players but still retaining what makes their team strong. They won the game with two simple incisive counters, and shots from the edge of the box from Jordy Clasie and Ryan Bertrand. That, along with their superior organisation and spirit, was all it took to reach their first League Cup semi-final since 1987.

Both of these teams, ultimately, are more interested in Saturday's Premier League games. But at least Saints have the thrill of a two-legged January semi against Liverpool to look forward to over the difficult winter. For Arsenal there is only the hope that their best players will come back fit soon, and that this little disappointment does not damage their Premier League confidence too much.

There can be no overstating what a dysfunctional Arsenal performance this was. In the first half they lost the game, passing the ball aimlessly but allowing Saints in to score with their first attacks. Southampton took the lead after 13 minutes with embarrassed ease. Ryan Bertrand broke down the left, against no challenge, and crossed. Sofiane Boufal's shot was blocked by Rob Holding but the ball fell out to Jordy Clasie, loitering on the edge of the box. Again, no challenge, so Clasie drove it into the near top corner of the net.

There followed another spell of Arsenal possession, but another one with no real speed, incision or skill. Saints simply sat and waited. Next time they went forward they scored again. Steven Davis won the ball from Carl Jenkinson and charged forward. Another cross from the left, this time from Boufal, to the edge of the box. Bertrand had time to take a touch and direct his shot into the bottom corner before the Arsenal centre-backs had woken up.

That was the end of that, even though Wenger threw on Granit Xhaka, Alex Oxlade-Chamberlain and Ainsley Maitland-Niles. There were brief flurries of urgency. Xhaka and Aaron Ramsey forced saves from Forster at the start of the second half, as Arsenal briefly threatened to get back into the game.

But they soon fell back into passivity, only rousing themselves again when the game was gone. Oxlade-Chamberlain gave them something, and found himself in their best late position, 12 yards from goal with 12 minutes left, but he skewed his shot well over the bar. Iwobi slapped a 20-yarder straight at Forster, and Van Dijk headed off the line from Kieran Gibbs. But for all of Arsenal's late energy they had nothing productive to show for it.

It was Southampton, in fact, who were likeliest to score at the end. Davis hit a lob onto the ceiling of the net, Shane Long ran through and skewed wide. 3-0 would not have been an unfair scoreline, between a team who brought what they needed to win, and a team who did not.