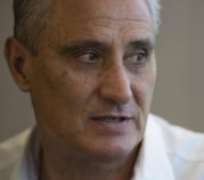 Now he’s offering to challenge Europe’s best, including defending champion Germany, as the five-time World Cup winners prepare for the 2018 World Cup in Russia, where they are likely to be among the favorites.

“Let’s play against Italy away,” Tite said Monday in a 35-minute interview with The Associated Press. “Spain, Germany, Portugal away.”

Tite also mentioned playing England at Wembley, which he called “the temple of football.”

Tite, speaking in his modest office surrounded by TVs, a blackboard, and books, said he didn’t expect his team’s quick success. But now that it’s come and with Brazil not playing in next year’s Confederations Cup — the World Cup warmup — he must look elsewhere.

“Since we won’t play in the Confederations Cup to feel the heat, the adrenaline, we will try another way.” He said Brazil needs “to play away so we feel that weight. So we have a solid performance in different venues.”

Tite is certainly interested in Germany, which humiliated Brazil 7-1 in the World Cup semifinals 2 ½ years ago in the Brazilian city of Belo Horizonte.

“The first step is to play a friendly against them, wherever they want in Germany,” he said.

The European schedule could become a reality quickly. Brazil, which leads South American qualifying, could officially qualify for Russia in its next two qualifiers in March against Uruguay and Paraguay.

Brazil defeated Argentina 3-0 and Peru 2-0 in its last two qualifiers in November, and moved to No. 2 in the world rankings behind Argentina.

Brazil has become less dependent on Barcelona star Neymar in the last few matches since Tite took over after Dunga was fired.

In the meantime, he has discovered several rising stars that have made Brazil a team — not a one-player show.

“If Brazil depends only on Neymar there will be a problem with Brazil, not with Neymar,” Tite explained. “Brazil needs the individual creativity of Neymar, Philippe Coutinho, Douglas Costa. But it needs the collective creativity that sometimes people don’t pay attention to.”

Tite also said that Neymar’s clash with Spanish tax authorities was “personal” though he added that there’s not much he can do about it.

Tite is counting on improvement from his No. 9, 19-year-old Gabriel Jesus, who is moving to Manchester City in January from Brazil club Palmeiras. He expects him to be as good in Europe as he’s been in Brazil.

“His level of performance will be very similar, with some tactical adjustments, of course,” Tite said.

Asked about investigations into CBF President Marco Polo del Nero, who has been indicted by U.S. authorities for corruption, Tite said “those responsible are the ones that have to pay.”

He declined to say more, but last year he signed a petition asking for Del Nero to resign.

Tite will be on the road in the next few days. On Thursday he is off to Spain to see Barcelona play Real Madrid. A big believer in scouting his players, he also expects to watch Brazilian players at Paris Saint-Germain.

The former coach of Sao Paulo club Corinthians, Tite is also a student of the game. He is reading former Manchester United manager Alex Ferguson’s autobiography, and the copy already is full of footnotes and notations.

But his main inspiration is Bayern Munich’s coach Carlo Ancelotti, who allowed him to be an observer in 2014 at Real Madrid.

“Ancelotti’s teams are more balanced,” Tite said. “It’s a more Italian defense and creativity from the midfield forward. I admire his work and also his discreet profile. I am also like that.”

When he is not working, Tite clings to his family in Rio. His son Matheus is one of his key scouts. And his wife Rose keeps him down to earth during their early morning walks.

He’s also thinking beyond the 2018 World Cup. But he suggested nothing will be as exciting as the next 19 months.

“I am honestly making a dream come true,” he said. “Anything that comes after Brazil will not be bigger than this.”