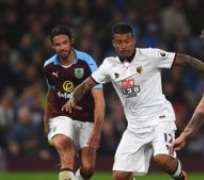 There have been quite a few loan success stories so far this season, but when you have well north of 30 players out on loan, there are bound to be a few failures.  One of the more disappointing ones has been 20-year-old Kenedy’s time at Watford.

We figured the skillful yet tenacious winger would be a great fit under new Watford coach Walter Mazzarri, either as an attacker or a wing-back, but so far, the Brazilian has played a grand total of 15 minutes in one substitute appearance to his name.  In what should thus come as no surprise to anyone, accoording to local sports magazine WD Sport , Chelsea are on the verge of recalling Kenedy in January, cutting short his season-long loan agreement.

Kenedy has been slowed by a knee injury as well recently that even had him training back at Cobham as a standard part of his recovery, but overall, his loan has been a giant waste of time.  He’d almost have a greater chance of getting minutes at Chelsea (he could conceivably be a decent backup at left wing-back) than at Watford at the moment!

So, yes, let’s bring him back in January and figure what’s next.