I have not broken any Nigerian law, says Yerima 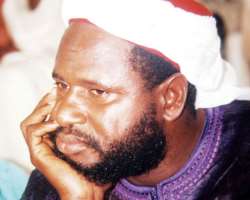 Sani Yerima, the former governor and senator representing Zamfara state at the senate on Monday said his recent marriage to an Egyptian girl was not a violation of any Nigerian law.

Mr. Yerima, who was answering questions from State House correspondents in Abuja, said the marriage was contracted legally and in conformity with Islamic injunctions.

He, however, stated that his political enemies were behind the negative media reports.

Mr. Yerima, who quoted Section 29 of the Nigerian Constitution to justify his wedding with the Egyptian, said "The section says that for a citizen to acquire citizenship or abandon his citizenship he must be 18 years or above or any woman who is married shall be deemed to be of full age”.

According to him, Section 38 of the Nigerian Constitution says every Nigerian has absolute and total freedom of religion without hindrance.

He said that every Muslim was supposed to follow the teaching and practice of Prophet Mohammed.

"Our beloved Prophet Mohammed married one of his beloved wives, Aishat, at the age of nine years. " As far as I'm concerned, I'm a law-abiding citizen of Nigeria. First I observe my religious rights and obligations and also observe as much as I can, the laws of Nigeria.

“So, I have not broken any Nigerian law,” he said.