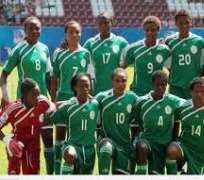 Nigeria’female under 20 team, the Falconets, have dramtically turned their fortune around by walloping the Canadian counterparts 3-1 in the ongoing  2016 FIFA U-20 Women's World Cup.

The Falconets were thrashed 6-0 by Japan in the opening game on Sunday, November 13, making football pundits in Nigeria to doubt their chances of making through the knock out stages. But like the Phoenix they  are alive again, with high hopes of getting result from the table-topping Spain. In the match played at the Bava Park, the Falconets went behind to Canada in the 15th minute when Gabrielle Carle fired past Nigerian goalkeeper. Uchendu fired in Falconets equalizer from the penalty spot after a Canadanian play handled the ball in the area. Bokiri gave Nigeria the lead immediately after the restart, rifiling from close range after the Canadian failed to properly clear the ball from their area.

Peter Dedevbo‘s girls extended their lead in the 73red minute though Ihezuo who capitalised on a mistake by the goalkeeper Foster to tap the ball into an empty net.

This win takes Nigeria to third to goal difference and will face Group B table-toppers, Spain on Sunday, November 20 while Canada face Japan on that same day.

A goal each from the trio, Chinaza Uchendu, Joy Bokiri and Chinwendu Ihezuo handed the Nigerians a life line in the championship while Gabrielle Carle scored the consolation for the Canadians.

Danjuma said though majority of the Falconets are rookies compared with the opponents they still went ahead to prove their worth with a resounding victory against Canada.

“First and foremost, Falconets showed the true Nigerian character coming from a 0-6 thrashing in the hands of the Japanese to beat Canada 3-1.

“Falconets exerted their whole strengths in all the departments to get the desired result against Canada.

“I think the coast is quite clear for the side to consolidate on the new found winning aura to overpower Spain in the last game on Sunday.

“The hitch on the part of Falconets is that majority of them are rookies in the U20 category compared with their counterparts from Europe and America who are already established playing in big clubs, Concacaf and other major championships.

“I believe the Falconets are doing their best in the circumstance they found themselves.

“Right now their concentration and focus should be on Spain, they have to strategise and come up with a winning programme to outclass the Spaniards.

“Most Spanish players metamorphosed from the U17 cadre and the continuity is right there so the encounter is certain to be tough.

“However, I believe the clash affords us opportunity to stand tall and avenge the 3-0 spanking our U17 side suffered in their hands.

“I'm hopeful that Falconets will secure the result to see them qualify from the group race,” said the Nasarawa Queens head coach to supersport.com.

Falconets will confront the group's leaders, Spain in a-must-win clash on Sunday at the PNG Football Stadium in Port Moresby to chance progression to the next stage of the biennial football showpiece.