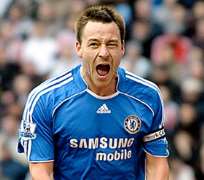 John Terry
Chelsea captain John Terry has declared himself '100 per cent fit' for the FA Cup final after coming through a full training session.

The England defender sustained a foot injury in training on Wednesday, but he confirmed a scan showed no serious damage, and he will play in Saturday's final against Portsmouth at Wembley.

Terry left Chelsea's Cobham training complex wearing a protective boot on his right foot, sparking fears he had broken a metatarsal bone, which could have ruled him out of the World Cup.

However, he told Sky Sports, 'There's no break and no ligament damage, just a bit of bruising on the inside of the foot. I've come through a full session and I'm fully fit and ready to go.

'Once I was out there striking the ball everything was totally fine.'

The 29-year-old admitted he feared the damage was worse following an accidental collision with Daniel Sturridge, saying, 'At the time I thought I'd done something quite bad.'

The news comes as a huge boost to Chelsea boss Carlo Ancelotti and England manager Fabio Capello, who already has injury concerns over captain and fellow centre-back Rio Ferdinand, while Ledley King's fragile knees prevent him from training and mean he can only play once every six days.

Terry has endured a topsy-turvy year, having been stripped of the England captaincy amid allegations over his private life, which led to Wayne Bridge effectively retiring from international football.