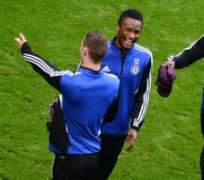 Chelsea pair Victor Moses and Mikel John Obi were the stars for Nigeria in the nation’s World Cup qualifier against Algeria on Saturday as the duo netted the goals that secured a 3-1 win for the Super Eagles.

Moses opened the scoring for the home side at the Akwa Ibom Stadium after he latched onto the ball and made his way towards the box in the 25th minute.

He attempted to pass the ball but, after it instead rebounded off a defender, the winger regained possession and rounded his marker before driving in a low shot into the back of the net.

His Chelsea teammate Mikel then doubled Nigeria’s advantage three minutes before the break after receiving a through-ball and firing in from close range with the Algeria defence attempting, unsuccessfully, to appeal for offside.

The goal stood, though, with Mikel appearing to be onside before Schalke’s on-loan Tottenham midfielder Nabil Bentaleb brought Algeria back into the game with his stunning long-range strike in the 67th minute.

But an unmarked Moses struck again in added time after driving in Ahmed Musa’s pass from the right to end the contest 3-1, which ensures Nigeria extend their lead at the top of Group B to six points, four more than second-placed Cameroon.

The other game in the group saw Cameroon and Zambia play out a 1-1 draw. Collins Mbesuma put Zambia ahead but Vincent Aboubakar levelled from the penalty spot on the stroke of half-time.

Elsewhere, two goals shortly before half-time put South Africa on course for a 2-1 victory against Senegal, which put Bafana Bafana top of Group D with four points from two games.

A 43rd-minute Thulani Hlatshwayo penalty was followed up by a Thulani Serero strike in the 45th minute before Cheikh Ndoye pulled a goal back for Senegal in the 75th minute.