WOLE SOYINKA PRIZE: AND THE WINNERS ARE… 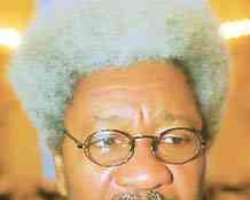 Prof. Wole Soyinka
The bi-annual Wole Soyinka Prize for literature in Africa has come and gone. It came with surprises and non surprises. One was the choice of winners. The previous editions had gone to female Nigerians and this time, it was obvious things were going to be different.

Indications of this emerged when Prof. Wole Soyinka, whom the prize was named after, remarked that many continental prizes were being won by Nigerians and that it was a relief for him when the BBC contest he reviewed recently turned out to have a non-Nigeria winner.

'Wale,' Soyinka said, addressing one of the shortlisted candidates, 'I am hoping you don't win tonight. Well, let the best person win tonight. Previous winners have been all women. It begins to look like Nigerian elections.'

Two winners - a male and a female - emerged. One was a Nigerian; the other, a South African.

The shortlisted candidates were Adaobi Tricia Nwaubani, author of I do not come to you by chance; Dr. Wale Okediran for Tenants of the House and Kopano Matlwa, author of Coconut.

Okediran and Matlwa emerged joint winners of the prize. The Chairman of the jury, Prof. Olu Obafemi, said that the joint winners had same scores. He said there was a tie and the jury decided to award the prize to both of them.

Matlwa thanked the organisers of the prize and said she was short of words to describe her excitement.

Okediran said that when he was scribbling his experiences in the House, he didn't see it getting that far.

Each book treated various issues. I do not come to you by chance dwells on Internet scam by Nigerian youths. It has already won the Commonwealth Regional Prize for Literature though it failed to clinch the overall prize at the final contest held in India last month. The book has also been listed as one of the best 100 books of last year. It was first published in the United States before being released in Nigeria.

The jury remarked that it was well handled, and that the plot gave an accurate interpretation of impersonation and scam with didactic qualities. They added that the conflict between virtue and vice gives the narrative a strong confidence and that it was beautifully written.

Okediran, on his part, was one of those who contested the prize last season. His entry then, made the shortlist but the prize went to Nnedi Okoroafor, a Nigerian prose writer based in the United States.

Matlwa's book is on self identity. It is a story of Blacks growing up in a Black nation that is ruled by a White ideology and dominated by White supremacists. The jury remarked that the characters came alive and with the power of language, Matlwa was able to create a peppy book that gripped the reader right from the first page.

The Wole Soyinka Prize is organised by the Lumina Foundation. One of the members of the Trustees for the Board of Lumina Foundation, Francesca Emmanuel, points to the increased number of entries as an indication that the prize was growing and realising the purpose for which it was set up.

'It is to encourage people to read and write,' she said, in her welcome address. 'We need good writings to get people reading. We must promote great minds for Africa who can promote our seriousness.'

She added that they had to search for someone who was an embodiment of the values they were seeking and that was Wole Soyinka.

'He is a writer, intellectual and citizen of the world who is well grounded,' she said.