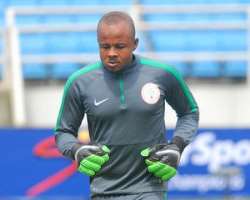 All three goalkeepers invited to the Super Eagles camp are jostling to get coach Gernot Rohr's nod to man the post in the absence of injured Carl Ikeme ahead of the 2018 World Cup qualifier against Algeria.

Dele Alampasu, former Golden Eaglets keeper, Daniel Akpeyi playing in the South Africa league with Chippa United and Ikechukwu Ezenwa  fresh from winning the Federation's Cup with FC IfeayiUbah are in camp ready to sweat it out.

Rohr is yet to make up his mind who will stand in for Ikeme who has been very outstanding so far and making sure that Vincent Enyeama is not missed. However, Ezenwa who was second choice keeper for the games against Tanzania and Zambia said he would be up to the task of preventing the Algerians from scoring. “I have understudied Carl Ikeme and I will give my best for my country to qualify for the 2018 World Cup, if I'm opportune to be in goal,” said the 28-year-old Ezenwa, who was in goal at the 2007 FIFA U-20 World Cup in Canada.