WILL 4X4 RACE CONTINUE TO GET GREEN LIGHT? 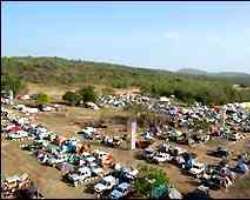 The beautiful and serene surroundings of the Rio Aro is one of the most unspoilt habitats in Latin America.

Normally, the only thing which interrupts the constant chatter of the tropical birds and the cicadas is the occasional rattle of a passing pick-up truck belonging to one of the local farmers.

But the rural silence has been cut by the sounds of the city – revving engines, blaring salsa music and helicopters whirring overhead.

Hundreds of 4 x 4s, quad bikes and off-road motorbikes have gathered in the Venezuelan savannah for what is fast becoming the biggest motor sports event in Latin America: the Fun Race 4×4.

Large investment
Little known outside Venezuela, the Fun Race is celebrating its tenth anniversary this year.

In that time, it has grown to around 500 teams competing in a range of categories attracting motor enthusiasts from across the oil-rich nation.

Continue reading the main story
I think we must have spent somewhere in the region of $200,000 on this car

Rafael Oviedo
Toyota owner
It's a growing business generating some 400 full time jobs, as well as injecting thousands of dollars into the local economies where the events are held.

Each race represents more than $2m worth of investment and there are several races a year. Many participants have invested large sums in upgrading their cars to competition standard.

“Suspension, transmission, the winch, a snorkel which is very important in this kind of event, special tyres, GPS system, radios,” says Rafael Oviedo as he lists the modifications on his team's Toyota.

'Fundamentally harmful”
But while the mud and petrol fanatics of Venezuela adore the Fun Race, it's not without its critics.

A few years ago, it faced an investigation by the environmental commission of the National Assembly after a high profile campaign accused the race organisers of holding the event inside national parks – a claim which was rejected during the investigation.

The mud flies during the race
As Venezuela is currently suffering its worst environmental crisis for decades, some people think the idea of allowing dozens of off-road vehicles to race at high speeds through the country's forests is at best inappropriate, at worse an environmental crime.

“Obviously people have the right to recreation, but I think the Fun Race is something which is fundamentally harmful,” says blogger and community radio presenter, Miguel Gonzalez.

“If they want to compete, I don't see why that can't be done in a specially designated circuit.

“The use of double traction cars with extra large tyres in natural waterways and rivers is damaging the flora and fauna. It's not an environmentally-friendly hobby.”

Strict controls
That is a claim robustly denied by the race director, Juan Ignacio Parra.

“We have very strict controls in place,” he says.
“Tyre sizes are restricted to 33 inches and no vehicle which has a leak of any description can compete.

“Indeed in the past we've had to turn teams away at the last minute because their cars don't come up to our rigorous requirements.”

Juan Ignacio Parra: “Rigorous requirements”
Back at the race, one of the 4×4s has run into trouble in a lagoon and is using a tree and a winch to pull itself free.

As the wheels spin and the mud flies, some on-lookers might agree with the blogger's environmental concerns.

But SeÃ±or Parra also points to the creation of the Fun Race Foundation – a non-profit organisation set up to administer donations to environmental causes and local schools – as an example of the responsible attitude of the event.

“Ecologists tell me that one race of the Fun Race does less harm than ten people walking in the Roraima national park,” says Eduardo Garcia, the head of the Fun Race Foundation.

“That's because the biodiversity there is such that a single foot print can leave a long-term impact. We just go through existing tracks on private ranches.”

Elite
But what of the country's president, Hugo Chavez?
Few events the size of the Fun Race go unnoticed by the socialist leader -especially one which is sponsored by the main anti-Chavez television channel in Venezuela, Globovision.

Associated as it is with the country's wealthy elite, or the oligarchy as Mr Chavez calls them, the Fun Race participants are well aware that one day they could be shut down should the president take a dislike to their event.

Indeed some believe that the only reason the Fun Race has escaped sanction so far is because a number of the competitors are linked to pro-Chavez politicians.

Either way, the Fun Race hopes to continue to grow for a further 10 years and expand into other Latin American countries such as Colombia and Panama.

If so, with green issues high on the agenda in Venezuelan politics for the first time in a generation, the organisers will have to ensure the drivers understand the importance of an impeccable record on the environment.