Conte bringing factor back to Chelsea after after last season's horror 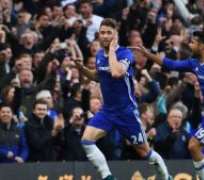 Antonio Conte has made Chelsea a team for the Premier League to fear once again after last season’s horror show under now Manchester United manager Jose Mourinho.

Chelsea blew Manchester United away at Stamford Bridge from the very start. Pedro’s goal after 38 seconds was followed up by strikes from Gary Cahill, Eden Hazard and N’Golo Kante as Conte saw his side march back among the top four.

The Blues lie only one point off Manchester City, who top the league, and scored a much-needed victory over one of their main rivals after suffering humbling loses to Liverpool and Arsenal earlier in the season.

The 4-0 win marks a change in mentality at Stamford Bridge. Confidence is flowing through the likes of Hazard and Diego Costa, who have remembered that they are truly great players once again.

Hazard failed to score in any game under Mourinho last season but has been reborn under Conte, while Chelsea’s 3-4-3 system has become supremely effective and could see the start of a much-improved record against the top sides after over a year of disappointing results.

The Belgium international has already equalled his tally from the whole of last season and Costa remains the Premier League’s top goal scorer despite not scoring against his old manager.

Against Liverpool and Arsenal Chelsea was exposed, overrun and fragile, but the club made United look weak at Stamford Bridge as Conte played a high intensity pressing game and controlled the match throughout.

Victor Moses and Marcos Alonso have helped Chelsea find the right balance as the club earned its third clean sheet in a row, and the 3-4-3 formation is here to stay.

Nemanja Matic has become unrecognizable from last season where his performances were so bad under Mourinho that some began to think that he may never recover the form of Chelsea’s title winning season of 2014-15.

Gary Cahill no longer looks error-prone and answered his critics while the club is beginning to establish its new identity in the post-Mourinho era by giving game time to young players like Nathaniel Chalobah.

Kante’s Lionel Messi-esque turn for the fourth goal was a delight to behold while the words “sexy football” were heard from the stands of Stamford Bridge for the first time in well over a year.

Conte showed up Mourinho in emphatic fashion. But more importantly, he proved Chelsea have moved on under their new boss, while Mourinho had little to smile about on his return to Stamford Bridge.

His legacy will remain at Stamford Bridge, and his fans gave him a song after the match was dead and buried, but Conte’s comprehensive demolition of United is the first sign that he can write his own story in the history of Chelsea.