Ambassador Obitex: Giving Hope To The Real Face Of An African Child 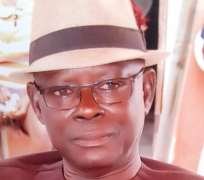 Apart from being the director and South-west co-ordinator of helping hands international(H2i),Ambassador Emmanuel Obitex is the CEO of Hope Alive Concept, an NGO that addresses salient problems affecting the African child over the years.

According to Ambassador Obitex, this non-profit making organization is a platform to showcase the African child innate talent for the world and give them basic education from primary level to university level. The desire to bringing hope to an African child gave me this golden mindset to set up Hope Alive Concept.

Again, this creative NGO is to transform the less privileged by inspiring them creating an avenue to improve their standard of education, knowledge and communication skills in Africa. The maiden event was held at Metropolitan Palace Hotel, Daira, and Dubai on the 25th of December 2015 and an 8years old girl, Miss Jessica Obalu won the talent hunt. Only children from 5-13 are qualified to participate in this event. It is corporately supported by DSTV, AIT and other major private companies in Africa. This year audition is holding in different cities of Nigeria.

Finally, Ambassador Obitex must be commended for his great work in Africa and beyond.

Disclaimer: "The views/contents expressed in this article are the sole responsibility of Godday Odidi and do not necessarily reflect those of The Nigerian Voice. The Nigerian Voice will not be responsible or liable for any inaccurate or incorrect statements contained in this article."
Articles by Godday Odidi
19-10-2016  God Only Wise Cleaning Services Ltd: A New Cleaning Company To Patronize18-10-2016  Bishop Leonard Umunna: A Man Of God With Philanthropic Heart In Nigeria18-10-2016  Wazobia Widows Foundation Of Nigeria Is Genuine—chief Ubogu10-10-2016  Guy Ohenhen: A Testimonial Match For A Grassroots Football Guru10-10-2016  Madam Roseline Odidi:you Left Indelible Marks On EarthMore...