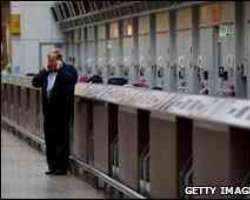 UK airport operator BAA has said that the volcanic ash disruption cut the number of passengers using its airports by more than a fifth last month.

The firm said passenger traffic in April was down 22.7% on the same month last year, with almost all the decline due to the ash disruption.

Last month, BAA said the closure of Heathrow and Stansted had cost it £28m.

Further restrictions
UK airspace was closed for six days in April because of the ash cloud from Iceland's volcano.

The ash cloud has continued to cause disruption to flights in Europe.

Airports in Portugal, France and Austria have all been forced to ground some flights overnight, while some airports in Scotland and the Republic of Ireland had restrictions placed on them over the weekend.

The Met Office has also warned that the ash may return to UK airspace in the coming days.