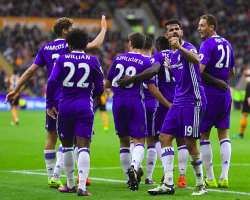 Relief all round. After weeks of handing their opposition an early advantage and leaving themselves with some rather daunting mountains to summit, Chelsea took a less challenging route at Hull. Here there were no real scares on the way to a comfortable 2-0 victory, and the gloss taken off the performance thanks to our hosts' irredeemable crapness can be ignored in light of three straightforward points.

Following league defeats to Liverpool and Arsenal in 4-3-3, Antonio Conte finally opted to move to a defensive system many had been expecting from the start. The Blues came out in a 3-4-2-1, fielding a back three of Gary Cahill (mercifully free of errors leading straight to goals), David Luiz and Cesar Azpilicueta. With Branislav Ivanovic dropped, Marcos Alonso made his full debut as a left wingback, while Victor Moses had pretensions to the position on the opposite flank.

Up top Diego Costa was supported by Eden Hazard and Willian, the idea presumably being to use the two deeper players in a free role and force overloads whenever Costa received possession. And for a while this new tactical scheme seemed, well totally and utterly useless.

Hull began the match well on top. Their aim was simple: find Dieumerci Mbokani with long passes and see what happens. What mostly happened, at least early on, was that Chelsea's defenders were magnificently flummoxed by route one football. David Luiz in particular was culpable, and when he gave up an early free kick within Robert Snodgrass range I'm sure there were more than a few hearts in mouths amongst our supporters.

Thibaut Courtois rescued that particular situation. Wrong-footed when Snodgrass's delivery flicked off Costa's head, the big goalkeeper nevertheless reacted superbly to reach back and punch the ball over the bar. Despite the save, however, the overall threat seemed to remain. Mbokani was targetted repeatedly, the defence remained remarkably unsure of themselves, and it took some abysmal touches from the big forward to prevent Hull making anything out of our collective discombobulation.

Things weren't going any better at the other end of the pitch. Costa and Hazard were isolated, and Chelsea's main attacking threat came from Moses's emphatic but mostly fruitless runs from wingback. Hull had conceded seven goals in their previous two matches, a statistic which was of scant consideration against the Blues' utter toothlessness going forward.

So there were two problems to deal with. Hull were causing problems by finding their target man with raking balls from deep, and Chelsea were merrily failing to get anything to stick in dangerous areas. Both problems were more or less dealt with by a simple switch. The Blues intensified their pressing game, with Hazard and Willian shutting down the wings while N'Golo Kante pushed high up the pitch. Put under real pressure for the first time all match, the Tigers' passing game crumbled, leaving Chelsea undisputed masters in midfield and able to focus more effort on Andy Marshall's goal.

It took until the second half for the ratcheting tension to produce any results. Before the interval, the closest we got to a breakthrough was when Moses had his leg hooked in the box by Adama Diomande, a shout that fell between 'I've seen them given' and 'Well he kicked him, didn't he?' on the penalty scale but was completely ignored by Anthony Taylor. Other than that, the threat just wasn't there. Things would change at halftime.

Marcos Alonso had Chelsea's first shot on target, a long-range damp squip which was easily smothered by Marshall. But then the Blues got going in earnest, with Hazard forcing a fine save and Kante trying his luck as well.

The tide had turned completely. Hull were on the back foot and busy shooting themselves in the front, unable to play their way out of trouble and routinely coughing up possession on the halfway line. The opening goal should have come sooner — Kante did well to seize possession and break quickly, but passed to Costa rather than the more central Hazard, then compounded his error by blazing over when Costa's tight-angle shot was deflected onto the post by Jake Livermore.

But that frustrating spell was only a temporary let-off for the hosts. To say Kante 'won' the ball after Andrew Robertson's header is to massively understate the gift Chelsea received. Able to break in numbers against Hull's back line, the Blues nearly managed to waste the attack, but a pair of lucky bounces let Costa sweep out to Willian, who cut inside and curled an 18-yard shot into the top corner. Photo by Shaun Botterill/Getty Images

The lead was soon doubled thanks to an equally fine finish from Costa. Alonso's short pass to Nemanja Matic, deep in the Chelsea half, seemed unlikely to lead anywhere, but the Tigers' midfield simply didn't bother to contest the big Serbian's run. Sixty yards later, Matic opted to shoot from the edge of the box, and although Curtis Davies managed to get a block in the ball broke kindly for the Blues, who saw Costa finish first time into the same corner Willian had kissed just seven minutes prior.

From then on the match was a foregone conclusion. Hull didn't have it in them to think seriously about a first goal, never mind a second, and Chelsea were more than happy to settle for three points and a clean sheet. They did finally manage to put together a slick attacking move without their hosts' help late on, a sweet, flowing and excessively flicky sequence, only for Willian to be clipped by Davies (no penalty this time either), but additional flair was clearly not required. The job had been done.

There will be harder tests to follow, and thus far the Blues have comprehensively **** themselves whenever faced with challenging opposition. But you can only beat what's in front of you, and today that was a Hull side determined to give us something to smile about. So, smile away.