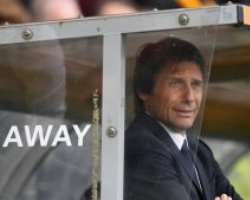 The jury is still firmly out on Chelsea boss Antonio Conte, who is yet to implement his style of play at Stamford Bridge, according to Tim Sherwood.

A 2-0 victory at Hull on Saturday saw the Blues return to winning ways after going winless in their last three Premier League games.

Conte switched to three at the back at the KCOM Stadium and it paid dividends as goals from Willian and Diego Costa sealed a much-needed victory.

However, speaking after the game in the Sky Sports studio, former Tottenham and Aston Villa manager Sherwood refused to be blown away by Chelsea’s display against a team he felt they should have dispatched with ease.

“Chelsea looked comfortable because they were up against [Dieumerci] Mbokani on his own and no one ever put any pressure on them,” Sherwood remarked when asked for his thoughts on Conte’s formation.

“They changed the system to play three at the back and if there’s one team you want to do that against its Hull City. It just fell nicely for Antonio Conte. “I would not like to see David Luiz being left on his own in the middle of the pitch when the centre-backs split against Jamie Vardy and Islam Slimani in their next home game.

“After that game will be the right time to judge and see whether Conte’s systems are working.

“To be perfectly honest they could have played any formation against Hull. Formation didn’t win them the game, the fact they’ve got world class players in abundance and Hull are struggling for real quality in the Premier League did. Tim Sherwood on Antonio Conte
“Let’s see in the next couple of games how Chelsea fare against Leicester and Manchester United and then we can judge Antonio Conte.

“If you’re a manager of a big club you should have an identity and you should not change it, why should you change? Antonio Conte says he’s pleased his Chelsea side bounced back from two defeats in a row to get back to winning ways, after winning away at Hull 2-0.

“We see Jurgen Klopp and Pep Guardiola’s identities. Chelsea are a big club, they should have their own identity and should stick to it.

“When they’re playing against teams like Hull they should go and play the Chelsea way. I’m just not sure what that is at this moment in time.”