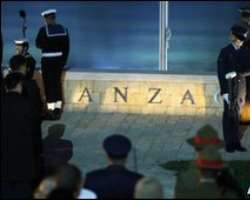 There has been an angry reaction in Australia after television producers cast a Caucasian man in the role of a Chinese-Australian war hero.

Billy Sing was a hero of the Gallipoli campaign in World War I, but a TV drama has him cast as a white man.

The producers say they could not find a 60-year-old Chinese actor to play Billy Sing's father, so both parts will be played by white actors.

They have been accused of re-writing Australian history.

Billy Sing was known as the “Gallipoli assassin”, the son of a Chinese man and English woman, who became a hero of the Australian forces during World War I by killing more than 200 enemy troops.

The recipient of a Distinguished Conduct medal, his memory is cherished within the Chinese-Australian community.

That's why there's been such an angry reaction to the decision of the producers of the television mini-series, The Legend of Billy Sing, to cast a white man in the lead.

The director, Geoff Davis, actually picked his son, Josh, to play the role, and defended the decision by saying that he could not find a 60-year-old Chinese actor to play Billy Sing's father.

He therefore decided that both men should be Caucasian.

But Chinese-Australians have complained that young people will now grow up thinking that Billy Sing was white, and that is a betrayal of their heritage.