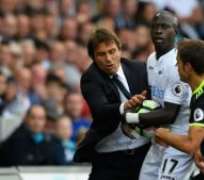 Antonio Conte hailed Chelsea’s spirit for scoring late to earn a 2-2 draw against Swansea City, but was frustrated they had failed to kill off the game beforehand.

Diego Costa opened the scoring in the first half but a Gylfi Sigurdsson penalty, awarded after Thibaut Courtois caught the Iceland international in the box, and an effort from Leroy Fer put Swansea ahead after the restart.

Fer’s effort appeared to be preceded by a foul on Gary Cahill, but referee Andre Marriner allowed play to continue and the Dutchman ran through to score.

Costa ensured the spoils were shared with an 81st-minute volley, but the nature of the draw rankled with Conte.

“I think Chelsea deserved to win this game. We created a lot of chances and we were dominating the game when we were leading,” he said in his post-match media conference.

“It is a pity, because we lost two goals today. Now we must look forward and prepare for the next game [against Liverpool on Friday].

“For their second goal, I think anyone can see the foul on Cahill. I think there’s a great mistake by the referee, but these can happen.

“The players showed they didn’t want to lose, they tried to win until the end. But if you can kill the game, you must kill the game.”

Captain John Terry appeared to sustain an ankle injury in the closing stages and reportedly left the Liberty Stadium on crutches.

Conte is not overly concerned about the centre-back’s fitness ahead of the match against Liverpool on Friday.

“Tomorrow we will see the situation about his ankle. I am not a worrier,” he added.