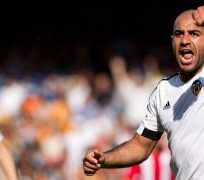 Chelsea's pursuit of central defensive reinforcements has prompted them to open talks with Valencia over signing Aymen Abdennour, initially on loan with an option to make the move permanent at the end of the season.

The London club have been frustrated in their pursuit of Kalidou Koulibaly at Napoli and Milan's Alessio Romagnoli, and had been linked heavily with an attempt to re-sign David Luiz from Paris Saint-Germain. Yet, with the left-back Marcos Alonso set to complete his £25m move from Fiorentina on Wednesday, Chelsea have opted to revive their longstanding interest in Abdennour as they seek cover at the back.

The Premier League side had first attempted to secure the Tunisia international from Monaco a year ago, only to pull the plug when the French club hiked the price as deadline approached. Abdennour, who had apparently indicated his preference had been a move to London, joined Valencia instead but is prepared to leave the Mestalla after only one season. Manchester City's Eliaquim Mangala is set to move to the Spanish club on loan as a replacement.