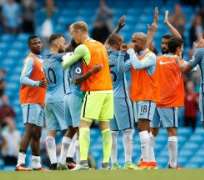 Manchester City turned on the style against West Ham to maintain Pep Guardiola’s perfect start to his Etihad reign.

City sparkled in the first half before they eased up after the interval, allowing West Ham back into the game when they should have been dead and buried.

Raheem Sterling continued his fine start to the season by opening the scoring before Fernandinho made it 2-0 after 18 minutes.

City were guilty of complacency and Michail Antonio gave West Ham hope when he pulled one back with a header.

Sergio Aguero was also guilty of elbowing Winston Reid and the City striker could face a retrospective ban, ruling him out of the Manchester derby.

Then Sterling got a well-earned second late on to earn the Man of the Match award.

Here are 5 things we learned…. 1. Pep Guardiola’s planning is paying off for Manchester City Pep Guardiola gestures from the touchline

Guardiola has hit the ground running at City, winning all five of his opening games, because of the hours he spent preparing for his new role before officially taking over at the start of last month.

The players understand his philosophy and some of their football was dazzling at times.

However they did ease up in the second half to allow West Ham back into the game. 2. England can benefit from the reinvigorated Raheem Sterling Sterling has looked like a £49million player under Guardiola and was again outstanding as he opened the scoring.

Guardiola has helped rebuild his confidence after his poor Euro 2016 campaign and Sam Allardyce should tap into this by starting him against Slovakia on Sunday and he could bring pace and drive to England’s attack. 3. Sergio Aguero showed an ugly side to his game. Aguero has been sensational for Manchester City during their opening games, but he was lucky to escape a red card when he elbowed Winston Reid.

Referee Andre Marriner appeared to miss it, but Aguero could face a retrospective ban, ruling him out of the Manchester derby after the international break. 4. Michail Antonio is much better going forward than defending

Antonio was awful operating at right wing-back in the first half before Slaven Bilic brought on Sam Byram and pushed him forward.

Antonio revelled in this attacking role and bagged his eighth headed goal to pull West Ham back into the game. 5. Arthur Masuaku should not have been on the pitch to create Antonio’s goal

Masuaku was already on a booking when he caught John Stones late on his knee with his left boot.

He then pushed his luck a second time when he got away with an obstruction on Sterling before crossing for Antonio to head home.