Brazillain woman, 20, shares photos of herself in bed with Usain Bolt 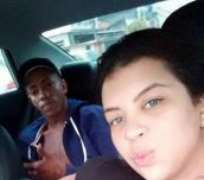 The woman who shared photos of herself in bed with Olympic champion Usain Bolt is reportedly the widow of one of Rio de Janeiro’s most dangerous former drug lords.

20-year-old student Jady Duarte unwittingly sparked controversy when she shared images of herself and Bolt kissing and getting close on WhatsApp pictures, after celebrating the sports star’s 30th birthday on Sunday (21 August.)

Details of her underworld connections have since emerged after it was revealed that Duarte has two children with Douglas Donato Pereira, also known as Diná Terror.

The drugs kingpin operated in the Faz Quem Quer shantytown in the north of Rio and living up to his chilling moniker wreaked terror in the area. The self-proclaimed “Lord of War” bragged about being the “terror of policemen” and frequently posted pictures of himself posing with guns on Facebook.

Terror was killed in a shootout with elite police troops in March this year after they tracked him down to a house in the favela. Following his death, Jady posted photos with the gangster on her Facebook page, declaring her undying love for him.

One post read: “In eternity, I will be with my love the way I always wanted, because in heaven all the time is time to be happy. God will take you in, it’s my hope that in eternity I will see you.”

Jady met Usain Bolt at De Bracos Albertas club where the sprinter was celebrating his third and last Olympics after winning three gold medals. The flamboyant star was in the mood to party as he was also celebrating his 30th birthday and was caught on video twerking with another woman at the Rio club.

And while Jady claims she didn’t know Bolt was famous when he approached her, it seems the Olympian knew little about his new acquaintance or her connections to a drug baron.

After the revelations of her encounter with Bolt made worldwide headlines the 20-year-old claimed she was left mortified by the attention. “It’s very negative,” she told local newspaper Extra. “I never wanted to be famous, I’m dying of shame.”

Describing her liaison with Bolt she added: “He sent a security guard to call me over. We spoke quickly. But at that moment I didn’t know it was him, because there were many Jamaicans who looked similar. It was not a big deal. It was normal. I’d rather not talk about it – in order not to complicate matters. Like I said, it was normal,” she explained.

Bolt has a girlfriend of two years at home in Jamaica — 26-year-old Kasi Bennett, who he calls his “First Lady”. The athlete’s sister Christine Bolt-Hylton claimed the couple were due to be engaged.

Amidst the controversy surrounding his encounter with Jady in Rio, Bolt left Rio before the closing ceremony and is expected to receive a hero’s welcome when he returns to Jamaica Mail Online reports.

The sprinter, who will now retire from Olympic competition following the Games, is expected to take on an ambassadorial role in athletics and has also signed a lifetime contract with Nike thought to be worth an estimated $30m a year.