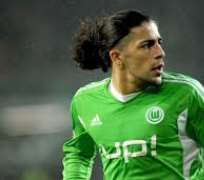 Chelsea are willing to meet Wolfsburg’s £22m valuation of left-back Ricardo Rodriguez, the Daily Mirror  reports, and hope to conclude a deal for the Switzerland international before the transfer window closes.

Rodriguez, who has previously been targeted by Arsenal, Real Madrid and Roma, is under contract in Germany until 2019 but wants to move on.

Signing a new left full-back has not been Chelsea’s priority, but a deal for Rodriguez would allow Antonio Conte greater flexibility in defence, with Cesar Azpilicueta able to go to right-back and Branislav Ivanovic then free to play at centre-half.

Joe Hart is considering a loan move to La Liga with Sevilla amid interest from Borussia Dortmund and Everton, but such a move could see Manchester City heavily subsidising the goalkeeper’s reported £140,000-per-week wages.

The Daily Mail claims Hart has little option but to leave City after the club agreed to a deal to sign Claudio Bravo from Barcelona. He has been left out of Pep Guardiola’s starting XI for the opening two games of the season and looks unlikely to fight his way back into contention under the former Bayern Munich manager.

A move to Everton is another option for the England No. 1, with boss Ronald Koeman admitting he is in the market for a goalkeeper — but having driven a hard bargain over the sale of John Stones to City, it could prove costly for the Toffees to bring Hart to Goodison Park. Tap-ins

– Crystal Palace have waited all summer to sign a striker and then, like London buses, two come along at once. Following a breakthrough in their pursuit of Benteke, L’Equipe reports that a move for Chelsea’s Loic Remy could be close too. Out of favour under Antonio Conte, Remy could be reunited with Alan Pardew, for whom he played at Newcastle.

– More bad news for Arsenal fans: The club have failed in the transfer market, again. This time, it’s a £16m move for West Bromwich Albion defender Jonny Evans that has been knocked back, according to the Birmingham Mail , with an offer upwards of £20m needed to prise the former Manchester United man from The Hawthorns.

– Another option for the Gunners is 21-year-old Atletico Madrid defender Jose Gimenez. However, Marca claims Arsenal would have to meet the Uruguay international’s full buyout clause, which stands at €65m. There is no doubt Gimenez has the potential to develop into a top-class player, but his inexperience at top level makes him a risky signing.

– Chelsea, Manchester United and Juventus are among the clubs interested in signing France international Blaise Matuidi, following news he will hand in a transfer request at Paris Saint-Germain in the coming days. TalkSport reckons the 29-year-old midfielder will be put on the market for £35m.