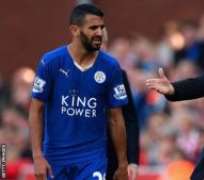 Claudio Ranieri says he has “higher expectations” for Riyad Mahrez this season, after the winger signed a new four-year contract with Leicester City.

Mahrez, 25, was also voted as the Professional Footballers’ Association player of the year.

“We are now in the Champions League and we need something more to play against the big teams,” said manager Ranieri.

“Now he knows very well what I want and my expectations are higher. Not only for Riyad but for all my players.”

Mahrez, who was strongly linked with Arsenal this summer, is the fifth Leicester player to sign a new deal after Wes Morgan, Jamie Vardy, Kasper Schmeichel and Andy King, while Ranieri also penned a new contract.

Leicester have reportedly rejected a £12m bid for Ghana’s Jeffrey Schlupp, and Ranieri says the full-back will stay at the King Power Stadium.

The Foxes face Arsenal on Saturday and have defender Robert Huth available after serving a three-game suspension.