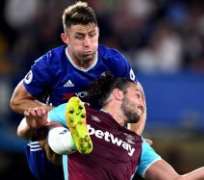 Gary Cahill has suggested that Chelsea have benefited from a more intense pre-season under Antonio Conte than last year's gamble by Jose Mourinho to have a short preparation period.

Chelsea certainly looked sharper in beating West Ham United 2-1 on Monday night than the early matches last season under Mourinho, who made a deliberate decision to alter the schedule in the hope that his players would be fresher at the end of the season.

M ourinho, though, was sacked shortly before Christmas with his team just one point above the relegation places.

“Pre-season is always hard but this was one of the hardest I have experienced in the last few years – definitely in terms of fitness,” said Cahill. “We did a lot of running and intensive endurance work. I feel it has been only good for the body and got us in the condition you have to be in to play in the Premier League.” Conte is animated on the sidelines during Chelsea’s opener with West Ham CREDIT: REX

W est Ham, though, felt aggrieved by the manner of Chelsea's win, with Diego Costa scoring the winner after a foul on  Adrián that they expected to result in a second yellow card. There was also frustration that a throw-in before the goal was awarded to Chelsea.

“It probably takes about five seconds for someone upstairs to look at a video,” said midfielder Mark Noble. “Someone has got to give us some help. We have put goal-line technology in.”

Of Costa's tackle, Noble said: “I knew it was bad. He didn't get anywhere near the ball. If I made that tackle in the middle of the pitch I am getting a yellow card.”