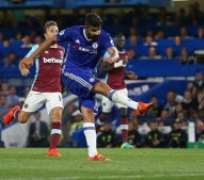 The Spain striker found the net from 20 yards in the 89th minute to spark wild scenes at Stamford Bridge, with Conte celebrating among supporters.

Eden Hazard had put the Blues in front from the spot after Michail Antonio fouled Cesar Azpilicueta.

James Collins levelled for the Hammers, but Costa’s finish settled it. Conte’s capers as Costa gets lucky

After a disastrous start to last season, which led to Jose Mourinho’s sacking in December and a 10th-place finish, Conte’s arrival at Chelsea will at the very least inject passion and animation into a side routinely accused of lacking commitment last term.

The former Juventus coach, where he won Serie A three times, is fresh from taking Italy to the quarter-finals of Euro 2016, where he displayed tactical nous alongside animated touchline antics.

And Chelsea supporters hugged their new manager in delight as he sprinted along the front of the stands following Costa’s low shot had crept into the net.

But the 27-year-old had been fortunate to still be on the pitch when, having already been booked for remonstrating with the referee, he escaped a second booking when he caught Hammers keeper Adrian high up on the shin with a late challenge. Kante and Hazard shine

The question of whether Chelsea can mount a strong title challenge will still remain after this display, with the Blues dominating possession but failing to finish off the visitors until late on.

But the all-action, energetic performance of £30m midfield signing N’Golo Kante – who won the title with Leicester City last season – and the vibrancy of Hazard, were positive signs.

However, Conte is likely to pursue further signings, with striker Michy Batshuayi – a late substitute – the only other new arrival.

West Ham have brought in eight players over the summer and three of them started – Arthur Masuaku, Havard Nordveit and Andre Ayew.

Striker Ayew, a £20m signing from Swansea, had a miserable night as he limped off in the first half with a thigh injury.

And manager Slaven Bilic is likely to have also been disappointed with the performance of his side, who struggled to get a foothold in the game and did not produce a shot on target until Collins lashed home a loose ball after a 77th-minute corner.

Dimitri Payet, so often the Hammers’ star last season, was restricted to coming off the bench after his exertions for France at Euro 2016 and was unable to make an impact in his 20 minutes on the pitch. Man of the match – Eden Hazard

Much maligned for his performances last season, Eden Hazard was persistently Chelsea’s most potent attacking threat What they said – ‘We played like tigers’

Chelsea forward Eden Hazard told Sky Sports: “It was good to be back on the pitch in front of our own supporters. We did very well and we played 90 minutes like tigers.

“It’s not every year I score in my first game. Last season is finished – we are looking forward to the future. We want to bring a lot of emotion to the fans.”

West Ham boss Slaven Bilic told Sky Sports: “When you lose a game and concede late, of course you are disappointed. Apart from the first 15 minutes until we equalised, they were much better than us.

“They were better on the ball, in pressing and much more aggressive than us. They had the individual class of Eden Hazard, Diego Costa and Willian.

“We came back into the game. We played well after 1-1, but we made the mistake in the middle of the park. We gave the ball away and conceded a cheap goal.” What’s next?

Chelsea travel to Watford on Saturday after the Hornets started the season with a draw at Southampton. West Ham have a trip to Romania on Thursday for the first leg of their Europa League qualifier against Astra Giurgiu.