Five players to look out for in Rio Olympics 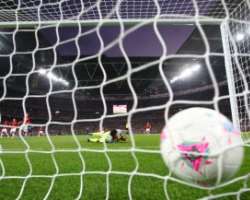 The Dream Team VI are set to light up the Rio 2016 Olympic Games in Brazil as they begin their quest for gold at the multi-nation tournament. The national U-23 team are pegged alongside Japan, Sweden and Colombia in Group B which many feel Nigeria should qualify from because they have bragging rights in football terms. There is no doubt that Mikel Obi is the most decorated player in the present crop of players that will feature at the Games however, the nation has never lacked talents who can take on the rest of the world.

However, the plaers who are likely to drive the team’s push for glory in Rio are:

1. Daniel Akpeyi: It was no surprise that Samson Siasia extended a call-up to the Chippa United shot stopper as his presence in the goal mouth for young lads will boost the confidence of defenders. He has two caps to his name in the senior national team.  Akpeyi is no stranger to youth tournaments as he was a member of the team that featured at the 2005 World Youth Championships in Netherlands and also at the 2008 Beijing Olympics where Nigeria won silver.

2. Sadiq Umar: The 19-year-old has continued his rise to the level of being a world class player with sterling performances for his Serie B club Spezia before going on loan to Serie A side Roma.

Umar was selected by Siasia in the 35-man provisional team to the Olympics and the striker did not fail to impress as he made the final 18-man cut. All eyes will be on the striker when he plays his first international game for Nigeria.

3. Oghenekaro Etebo: Etebor is one player that has been with this squad right from the qualifiers to the U-23 CAF Nations Cup and now the Rio Olympics. The team's top scorer has been a pace-setter in the team. His power playing style will be a handful for defenders at the Rio Games.

The 20-year-old was named Most Valuable Player at the CAF tournament with five goals after which he registered his first goal for the Super Eagles against Egypt in an AFCON qualifier played at the Sani Abacha stadium in Kaduna.

4. Okechukwu Azubuike: The Yeni Malatyaspor midfielder has captained the team all through their qualifying campaign because of his leadership qualities and his influence in the midfield.

Azubuike admitted the team's poor performance at the Suwon tournament as he took responsibility for their sloppiness after coming third in the four-nation tourney. He said: “I am very concerned and it's the same with the other players and we have been holding meetings on how we can improve” and this a trait of true leadership.

5. William Ekong: With six appearances for the Super Eagles, the 22-year-old was given the chance to represent Nigeria because of his composure and consistency in defence for both club and country. Though the Gent defender is another new entry into the squad, Siasia believes his experience playing for the Dutch U-19 and U-20 national teams as well as briefs spells in England and the Eredivisie, could be a key factor when the Dream Team VI come up against tough competitors at the Games.