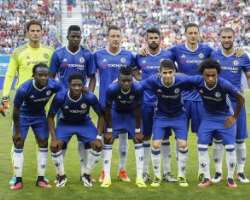 CHELSEA still have time to “close a deal” for Napoli defender Kalidou Koulibaly, his agent has confirmed.

The Blues are understood to be keen on landing centre-back Koulibaly, as are Everton .

Napoli want around £46million for their star man, who played 42 games for the club last season.

The 25-year-old has reportedly handed in a transfer request and Napoli are refusing to improve his contract.

And his agent Bruno Satin has revealed Napoli are now open to selling the Senegal international.

“Let’s be clear, I went to meet the president at (the training base in) Dimaro last Saturday,”  Satin said .

“We summed up the situation after these tense few weeks.

“That I know of, he’s not about to renew and the future doesn’t look rosy.

“The player’s desire is to leave and the signs we’re receiving from Napoli don’t exactly pressure him otherwise.” Napoli are poised to agree a deal with Juventus over the £78m sale of Gonzalo Higuain.The striker is set to boost his wages to £6.3m a season and Satin admitted money is a factor in Koulibaly seeking to join Chelsea . Chelsea remain in the race to sign Kalidou Koulibaly “We’ve decided to leave for economic reasons,” he said.”After what happened to Higuain, though, Kalidou will not be leaving for Juventus or another competitor.

“Chelsea still want him and there’s time to close a deal.”