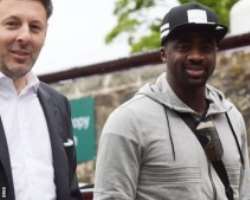 Coach Emmanuel Amuneke's side needed a draw to stand a chance of defending their title in Zambia, but were unable to do their part and the north Africans won at the Teslim Balogun Stadium.

After a positive start from the hosts, Samuel Chukwueze fired the Flying Eagles into the lead inside 15 minutes, drawing applause from the scanty Lagos fans. The forward found his way in the Sudanese half, breezed past two marker before unleashing a missile outside the goal area that beat impressive Ishag Abdalla in goal.

But Amjad Ahmed leveled up for the visitors five later after a defensive mishap from Amuneke's side.

Funsho Bamgboye restored a modicum of respect in the 26th minute as he climbed above captain Mustapha Ali to nod Chukwueze;s cross past Abdalla.

Khaled Abdamuleem then put his side back profiting from another defensive blunder stabbing a flick-on from Ibrahim Mohammed beyond Akpan Udoh in the closing stages of the first half.

Victor Osimhen and Kelechi Nwakali passed up opportunities to test Sudan early in the second half so Amuneke made another attacking change – striker Orji Okonkwo for a midfielder Gavin Thompson.

For the first time, the visitors took the lead courtesy Walaadihh Musa whose shot beat goalkeeper Udoh. With the Flying Eagles in dire straits, they attacked the opponents in numbers.

And Nigeria's hopes of turning the game around were given a boost five minutes later as Musawas shown a red card for dissent.

Substitute Okonkwo made it three for his team after nodding in a well-orchestrated cross from Osimhen.

Flying Eagles' lack of ingenuity proved costly in the 83rd minute as the Abdamuleem completed his brace to compound the hosts’ misery.

Despite the hosts' late rally, the damage had already been done with Sudan booking a place in Zambia 2017.